Michaele Salahi and Neal Schon have broken their silence over their illicit romance. 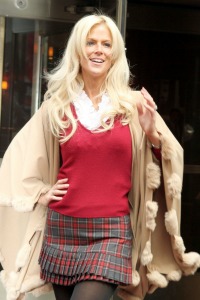 Michaele Salahi and her Journey beau Neal Schon insist their love is real, and it has only grown stronger over the last 15 years.

“It’s like a fairy tale. It is, it really is,” Neal told the Daily Beast. “I’m very happy, very happy after waiting for her for 15 years. Now I want to get beyond all this media hype that Tareq has put out there. It’s really quite embarrassing.”

Turns out Michaele dated both Schon and her cuckolded soon-to-be ex-husband Tareq Salahi at the same time in the ’90s, but chose Tareq.

“I chose Tareq over Neal because I thought life would be less stressful living on a vineyard in Virginia,” said the former castmember of The Real Housewives of DC. “Life on the road with a rock band… well, I thought I might not have been able to keep up.”

The night Michaele knew she had to leave her husband was the night of a Journey concert Tareq came to with her.

“What happened was… she takes off her wedding ring… right in front of Tareq. Takes it off,” Schon explained. “And then she proceeds to come into my dressing room where I’m sitting down. I have tennis shoes on and she’s like, nine feet tall over me. And she looks down at me like she’s standing on stilts and says ‘I love you, and that’s never gonna change.’ And when that happened I said, ‘Get over here! This has taken 15 years!”

“I didn’t want to hurt anyone, but I realized I was hurting myself,” said Michaele. “I began to see he really loved me. I had to begin to feel it completely in my soul.”

“I was going crazy,” she said. “Because when you want to be with someone that bad, you start to go crazy. He [Neal] sent someone to come get me. I got on a plane by myself and I just went. I just walked away from everything.”

Tareq has already filed for divorce from Michaele. She says he was controlling, eking out her access to her car, her cash and her phone. He is definitely in charge of the purse strings now: According to an adultery clause in the couple’s prenup, she will get nothing because she cheated.