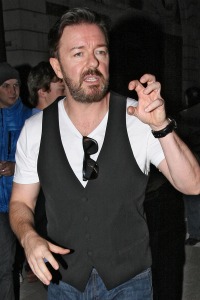 If you thought you’d never see Ricky Gervais at another American awards show after the Golden Globes fiasco, you were probably shocked to see his face appear on a huge screen over the Emmy stage.

Gervais delivered a taped message to the Emmy crowd, and true to itself, it mocked his acerbic wit — the biting humor that got him in trouble with his peers in the past.

Here’s the running gag: Every time Gervais appeared to be about to swear or say something nasty about a star, it was edited out.

“Hello. Firstly, sorry I can’t be there live in person. Not allowed. Not after the Golden Globes,” Gervais joked. “In fact, now, during any awards ceremony, I’m not even allowed on American soil. This is prerecorded and the Emmy bosses have warned me if I say anything rude or controversial, they will edit it out and you won’t know the difference.”

“What a bunch of cowardly [edit] countrymen like Simon Cowell and Piers Morgan. We’re proud of you. I’ve won a few Emmys myself. I’ve lost a few, too. I was up for five last year, and I lost them all to other shows that in my opinion were absolute [edit] Schindler’s List, but then went on to do TV with Band of Brothers and The Pacific for HBO, which in my opinion, is the greatest channel in the world [edit] apart from [edit] fox [edit] that is, [edit] obviously,” he continued.

“Anyway, I’ve been rattling on for about 10 minutes. I hope I didn’t say anything that you found offensive. Though if I did, I don’t care. You can suck my [edit] Twinkie. Thanks for listening. And finally, thanks to God for making me an [edit] absolute idiot. There I said it. Again.”

Watch the video of Ricky Gervais at the Emmys: