Charlie Sheen has certainly been making amends on shows from Late Night with Jay Leno to Today and the Emmys. On the heels of his Comedy Central roast and his Two and a Half Men funeral, Charlie Sheen and Warner Bros. are nearing a settlement. Could there be a connection?

With Comedy Central’s Charlie Sheen roast and Ashton Kutcher‘s first Two and a Half Men episode done, the Charlie Sheen comeback train seems to be running at full steam. TV’s infamous winner has been singing a more repentant tune of late, which may be why he has a $25 million deal with Warner Bros reportedly coming together. 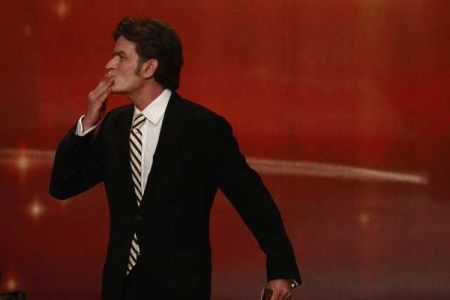 Sheen has already landed a new indie flick and has the sitcom Anger Management for sale, but he made his comeback efforts complete with a big Emmy shout out to Two and a Half Men. The apology and well wishes were a bit uncomfortable, but Sheen seemed to do better when he ran into his replacement, Ashton Kutcher, backstage.

Now, word comes that Sheen and Warner Bros. are “putting the finishing touches on a deal,” according to The LA Times.

At the same time, however, Chicago Sun Times is reporting that Two and Half Men exec producer Chuck Lorre tried to keep Sheen from making that Emmy appearance. It seems not everyone is ready to accept Sheen’s best wishes — or rather, not everyone was confident about how he would use his Emmy moment.

The fued between Sheen and his former bosses started back in Jan. after Sheen’s Christmas arrest. Lorre and Warner Bros. gave him some time off to handle his substance abuse issues, but after Sheen announced he was ready to come back and his bosses disagreed, the drama kicked into full gear.

Sheen went on a negative campaign, visiting the same shows he’s been to in recent weeks to rant about his former bosses. In turn, his bosses canceled the rest of the season and ultimately, fired him. Sheen countered with a $100 million lawsuit against Warner Bros. and Lorre, but a judge told them to hash it out in arbitration back in Mar.

The new $25 million figure seems like a steep decline from the $100 million asking price, but it’s actually quite close to what Sheen had left on his contract. As the highest paid actor in TV, Sheen was banking $1.2 million per episode, with 32 episodes left on his contact. That comes out to $38.4 million in pay for those episodes, though Sheen initially claimed he deserved more based on a clause in his contract.

While the math shapes up, however, TMZ is reporting the $25 million is not to make up for Sheen’s future losses, but rather, for work he’s already done. Word is the paychecks stopped once the drama escalated, so the agreement covers back pay.

With the conflicting stories, it’s hard to determine who’s making nice here or who’s really winning. Either way, SheKnows is glad to hear this celebrity fued could finally be coming to an end.

Neither Sheen nor Warner Bros. is talking — at least, not on the record. Stay tuned for updates.