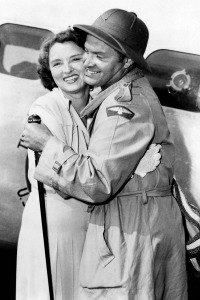 Bob Hope and Dolores Hope enjoyed a whopping 69 happy years together, ended only by the actor’s death in 2003. Now Dolores has joined her husband.

Dolores Hope died Monday morning at her Toluca Lake, California home, according to publicist Harlan Boll. She was 102 years old.

Dolores spent much of her marriage overseeing the couple’s charitable givings, including the establishment of the Eisenhower Medical Center in Rancho Mirage, California, built in the late 1960s on 80 acres of land donated by the Hopes near their Palm Springs estate. She remained on board as chairwoman of the center’s board for years.

Dolores often joined Bob on his many USO tours, performing for the troops alongside her husband.

“She was the first lady of the USO,” said friend and fellow performer Carol Channing. “They didn’t come any more patriotic, caring or talented than Dolores.”

A statement from the USO reads, “The entire USO family mourns the loss of Dolores Hope, as we have admired the Hope family’s dedication to troops and their families. Dolores Hope was a national treasure. As the family that accompanied Bob Hope, she had a unique ability to lift the spirits of our troops and their families. The USO family offers our condolences to Linda Hope and all members of her family at this difficult time.”

Dolores is survived by her daughters Linda and Nora, her son Kelly, four grandchildren and one great-grandchild.