Dancing with the Stars premiered with a few good dances and a few awkwardly weird ones. Read on for the details.

Dancing with the Stars season 13 premiere — did you survive the first dance?

The time for talk is over. Season 13 of Dancing with the Stars premiered on Monday night, and the cha cha and Viennese waltz were in full effect. 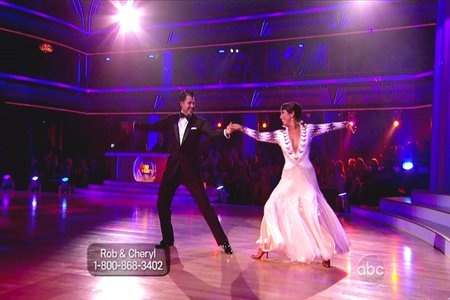 Check out how the competition stacked up…

Ron and Peta (14/30): Ron Artest and his partner Peta Murgatroyd took on the cha cha for their debut on Dancing with the Stars.

How did he do? Well, we give his facial expressions a 10 right off the bat. He has the most intense look on his face when he dances – – it’s a cross between mugging and trying to be sexy.

As for the dancing — it was a bit too basic for us and Len Goodman agreed. He said it was too much “shimmy” and not enough “cha cha” and that’s exactly what we thought.

Rob and Cheryl (16/30): It’s been 10 seasons since Cheryl Burke has won DWTS and she wants it bad. We were concerned when we found out she and Rob Kardashian had to premiere with the Viennese Waltz, and if smiling were part of the deal, he’d have this thing in the bag.

He has potential, but as Len said, he was “too careful.” You could see he was counting in his head, and it wasn’t the Kardashian millions, it was his steps. He’s too cute — we want him to succeed.

Kristin and Mark (19/30): Kristin Cavallari and Mark Ballas’ cha cha was nothing like Ron Artest’s! No mugging for the camera or useless shimmying.

For her debut dance, Kristin Cavallari shook her booty like a newly single gal on the town — wait, she is newly single, so that makes sense. She worked the hair, the body, the costume — everything. Bruno Tonioli called her a “bad girl” with “hot hips.” Easy, Bruno!

Chynna and Tony (22/30): Chynna Phillips and Tony Dovolani — could they be the ones to beat? Based off of their first dance, they could be.

Chynna looked elegant and effortless while dancing the Viennese waltz — but the dance itself was kind of boring. We were also very distracted by Tony’s really, really bright smile. Maybe he uses the same dentist as Rob Kardashian. Anyway, beautiful dance, but boring in general.

Nancy and Tristan (16/30): Did we seriously just watch Nancy Grace do the cha cha with her partner Tristan MacManus? She talked a big game about wanting to just “have fun,” but it looked like she had a wee bit of trouble remembering the steps. We give her props for trying to shake it.

David and Kym (18/30): David Arquette and dancing — we didn’t know if it would work, but it did! He led Kym Johnson around the floor like he was on air. It wasn’t cluttered with fancy hoopla — he got down to business and did a graceful and elegant job with the Viennese waltz.

He could be our new frontrunner. Side note, we may change our mind — a lot — on who we want to win.

Elisabetta and Val (15/30): We’re not sure what was supposed to happen with this cha cha, but Elisabetta Canalis and Val Chmerkovskiy took way too much time to get it going.

They had props and weird moves and it was not pleasant — at least not to us or Len Goodman. Note to these two — get rid of the props!

Hope and Maks (21/30): Hope Solo can play soccer and dance! Hope and Maks Chmerkovskiy danced a Viennese waltz that wasn’t perfect, but she showed everyone she has potential.

She has clean lines and you can see the athlete in her. The judges all agreed that all she needs to work on is the normal tweaks after dancing the first dance.

Carson and Anna (17/30): Carson Kressley can never leave — ever! He is so much fun and his cha cha with Anna Trebunskaya was full of razzle dazzle!

We were getting a bit bored by everyone trying so hard. Carson ran out on the floor, struck a pose and shook his bottom like crazy person. His footwork was not at all perfect, but he is the least boring to watch so far.

JR and Karina (22/30): There’s always one pair that surprises you on the first day, and for us, it was JR Martinez and Karina Smirnoff.

He’s the gentle giant of the group. His Viennese waltz was effortless with so much emotion and as Len said, it was the “best of the night.” He’s going to be the quiet guy who keeps raising the bar each week. He might be this season’s Hines Ward.

Ricki and Derek (20/30): Team D-Rickilous was in the house with the Viennese waltz. Who is this girl kidding, she still has it! Derek Hough is the perfect person to guide her to the mirror ball trophy.

She only needs to work on her feet and Derek will whip her into shape. Other than that, she actually looked like a dancer in training.

Chaz and Lacey (17/30): Chaz Bono came to fight — or dance, depending on the way you look at. He did not disappoint his partner Lacey Schwimmer with their cha cha.

He’s a big guy and admitted it, but it didn’t show as much as we thought. He kept up, did the moves and did it all with a smile. We think the negative nellies have actually fueled his fire. It wasn’t like he was perfect, but he did good for the amount of pressure he was under.

Read on for more Dancing with the stars news