Bethenny Frankel’s picturesque afternoon sail turned into a nightmare she calls “terror on the high seas.” The one thought on the Skinnygirl mogul’s mind during the ordeal? Her daughter Bryn.

Bethenny Frankel and sailing crew, pictured here before their nightmare journey began on Saturday, are thankfully all alive and well — though there were moments while lost at sea when their safety was far from a sure thing. 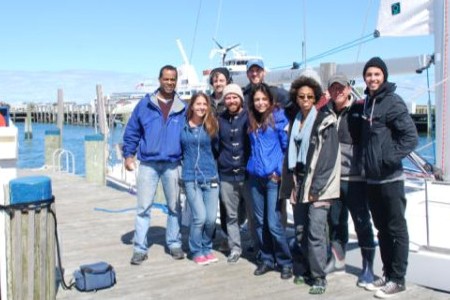 The drama all plays out on Bethenny Frankel‘s Twitter page after the Skinnygirl creator made it back onto dry land. The mother of 16-month-old daughter Bryn with husband Jason Hoppy writes: “Worst night of my life. Literally being lost at sea was beyond traumatic. All I thought of was Bryn. Terror.”

The sailing trip that was supposed to last eight hours turned into a 24 hour nightmare when the group’s vessel hit a wave and their GPS navigation system broke. The captain then had to call for the coast guard to guide them back to shore.

“I have best crew in the world,” Bethenny Frankel says of the Bravo team filming on board with her, some of whom are pictured here under the caption, “This is my crew who experienced terror on the high seas with us.”

Even once safely on shore the Skinnygirl owner struggled to shake the fear. “So now we’re in nantucket walking around like zombies,” Bethenny tweeted. “I feel like I was hit by a train.”

Finally on Sunday she added, “I am SO HAPPY to be home. What a terrifying weekend. I’m kissing the ground, thanking my lucky stars&the coast guard!”

So glad to hear Bethenny Frankel is safe and sound on dry land! Think we’ll be seeing a Bethenny Lost at Sea episode next season?