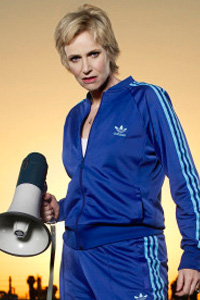 Jane Lynch escaped controversy in her recent gig hosting the Emmy Awards, but she may not fare as well when her Glee character, Sue Sylvester, runs for Congress on an ultra right-wing platform. In fact, conservative author Ben Shapiro has already expressed his disapproval.

“This is unbelievably typical of Glee, which has become the most subversive show in the history of network television,” he told the London Independent. “They are using Sylvester’s character to mirror the rhetoric and policies of Michele Bachmann. When conservatives watch this show, it will be clear that the creators hate our guts.”

Lynch, who married her girlfriend Lara Embry last May, told the NY Post about her Glee character’s recent political aspirations, “She’s going to run on the platform of, ‘Let’s get rid of the arts and cut all the entitlements,'” she said. “She’s basically running as Michele Bachmann, without the crazy ‘I hate homosexuals’ bit.'”

Glee creator Ryan Murphy inferred they are not picking on Bachmann, saying that Lynch’s character is actually creating her own party, called the Sue Sylvester American Liberty party.

“She runs against both Republicans and Democrats. So to be clear, it’s not a Tea Party thing. She hates everybody,” he said.