Jon Cryer received a star on the Hollywood Walk of Fame today, and he gave a shout out to his former Two and a Half Men co-star Charlie Sheen during his acceptance speech. 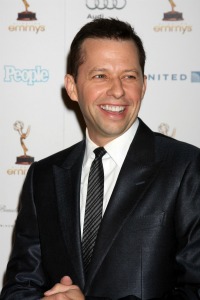 Two and a Half Men’s Jon Cryer received one of Hollywood’s most prestigious honors today — his own star on the Hollywood Walk of Fame.

Cryer, a veteran actor with over 27 years in the business (he made his screen debut in the 1984 film No Small Affair) was flanked by Men co-stars Ashton Kutcher, Angus T. Jones and series creator Chuck Lorre as he received his honor.

As he gave his speech of thanks for the gifts he’s been given as an actor, Cryer made note of one person in particular he should thank for his good fortune on Men, Charlie Sheen.

Said Cryer, “I do have to say a real word of thanks to my co-star of eight years, Charlie Sheen, who gave me so much as a performer and who I enjoyed working with so much.”

He then went on to say, “But perhaps, more importantly, I feel the need to thank Chuck Lorre and Lee Aronsohn, who when they saw somebody who was clearly in distress, took every possible means to try to help their friend, and who, you know, when it came time to make the ultimate decision, which was someplace that nobody wanted to go, did something that in my belief, saved my friend.”

Several little known Cryer facts: he auditioned for the role of Chandler Bing on Friends while doing a play in London, but his audition tape failed to arrive to the desk of the casting director before the network chose Matthew Perry . The character Cryer brought to life that which everyone came to know and love as Duckie in Pretty in Pink had an original name of Phil Dale. Cryer’s casting on Men was against the wishes of CBS executives, who knew that he had been in several years worth of failed television pilots prior to his success on the long-running CBS sitcom.

51 mins ago
by Reshma Gopaldas