Writer Aaron Sorkin just broke his nose. So, was he in a salacious fight? A drunken brawl? Fighting a bear? No. Sorkin broke his nose while writing a script. 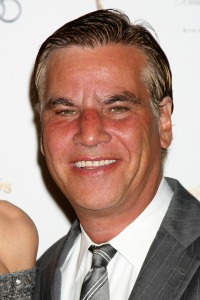 Academy Award-winning writer Aaron Sorkin is known for films like A Few Good Men, last year’s hit The Social Network, and the upcoming (and much buzzed about) film with Brad Pitt, Jonah Hill and Philip Seymour Hoffman, Moneyball. He’s not known for brawling. The poor guy broke his nose while writing a script. “I wish I could say I was in a bar fight,” Sorkin told the Ministry of Gossip at the Emmy Awards’ performance nominees’ reception in West Hollywood, “but I broke my nose writing.”

Sorkin was apparently working on some dialogue in the mirror when he accidentally bumped his face on it. Well, who hasn’t done that while practicing a speech? That must have been some scene he was working on!

Sorkin is writing a behind-the-scenes drama about a cable news network for HBO, to star Jeff Daniels, Emily Mortimer and Dev Patel.

Wouldn’t you think that a writer like that would make up some sort of fantastic story about how he broke his nose? Defending someone’s honor or fighting off rabid monkeys? Still, talking to yourself in a mirror is pretty funny. We hope he feels better soon!

Are you guys looking forward to Moneyball? Or did Brad Pitt’s comments about Jennifer Aniston and their marriage put you off? They certainly made news, even after all these years with Angie! We look forward to reading your thoughts below.

More on Aaron Sorkin and Moneyball: