Charlie’s Angels star Minka Kelly opened up recently about growing up with her mom Maureen, who was a Vegas showgirl and stripper. 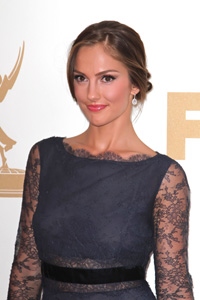 Minka Kelly told Cosmopolitan magazine that growing up with her mom, who died of colon cancer in 2008, had its ups and downs. The 31-year-old Charlie’s Angels actress said that life with her stripper mom meant she moved around frequently.

‘She was 5’11, legs up to her ears, gorgeous. She got along on that for as long as she could,” said the actress, who recently split with Derek Jeter.

She said her father, Aerosmith’s Rick Dufay, was absent throughout much of her childhood, however he wanted to have more of an influence on her growing up. “He wanted to try and do the family thing. It was my mum who was too busy having fun,” she admitted.

Kelly was with her mom when she died of cancer three years ago – and said the two of them had bonded in her final days. “By the time she passed, I was holding her. I was with her until her last breath,” she said.

The actress told Esquire that even though her childhood had its challenges, it also had its bright moments. “My mom lived a fast life,” Kelly said. “It was all about what we could do to have fun with nothing. For most of my life, she was a dancer. An exotic dancer. She was a stripper. Um, so she would come home at like three, four o’clock in the morning, and sometimes she would have a really great night, and so she would wake me up in the middle of the night and we’d go to Ralphs and go grocery shopping. And that was so much fun. We’d have the whole grocery store to ourselves, and we would have a blast and buy a hundred dollars in groceries. And it was just the best day ever. The best day.”

Even though Kelly said they were friends, she reflected that she often wanted more of a mom than just a friend. “I didn’t know how to appreciate what good friends we were, because I just wanted her to be my mom,” she told Cosmopolitan.