Brooke Burke’s name is getting a makeover! It’s out with the maiden name and in with the married on tonight’s episode of Dancing with the Stars. Please welcome host Brooke Charvet! 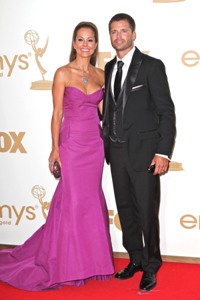 Brooke Burke is bucking the Hollywood trend of keeping a maiden name for the sake of image continuity. The recently married star is kissing “Brooke Burke” goodbye in favor of being known as “Brooke Charvet.”

Attentive ears listening in on Monday night’s Dancing with the Stars episode will hear the first televised introduction of Brooke Burke as Brooke Charvet. “Tomorrow on Dancing with the Stars will be the first time I go by my new name [on TV],” the 39-year-old, pictured here at Sunday’s Emmy Awards with hubby David Charvet tells People. “I’m happy about being Brooke Charvet.”

Just one month ago the mother of four tied the knot with long-term fiancee David Charvet in a secrect (and by all appearances utterly romantic) ceremony in St. Bart’s. “The timing just felt right,” Brooke Burke says of her island wedding. “It was a very selfish, but meaningful moment. It was really spontaneous and romantic and really about us and not about what everyone else wanted or thought.”

At the time, the season 7 winner of Dancing with the Stars tweeted the happy news, writing, “sending my 1st good morning tweet as Mrs. Charvet…Its true, we finally did it with love and certainty. OMG, I am a married woman!!!”

Brooke Burke added, “sorry to be so secretive, but we REALLY needed a private moment just for us for all the right reasons. Love you guys xoxo”

Yet despite the newlywed’s obvious love, reaction to Brooke Burke’s name change hasn’t been all positive. “It’s been 50-50 from everybody,” the newlywed admits adding, “but I’m doing it!”

Where do you stand on the Brooke Charvet / Brooke Burke name change?