What’s funnier than David Beckham dressed up as a Target employee encouraging customers to sniff his thighs? Not much! Watch the laughs, courtesy of Ellen, here.

David Beckham and Ellen DeGeneres have been up to a bit of shenanigans. The soccer star and the talk show host cooked up a scheme to trick Target shoppers to unknowingly sniff David Beckham‘s thighs on Friday’s episode. Watch the hilarity below! 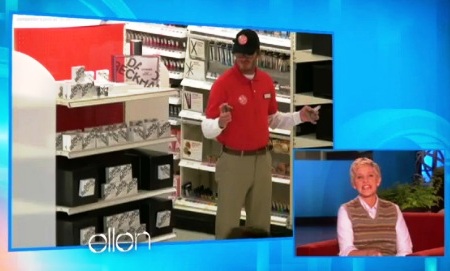 David Beckham is not only good at sport, he’s proven to Ellen DeGeneres and viewers worldwide he’s a phenomenal sport when it comes to humor. On a recent episode of the funny woman’s show the father of four with wife Victoria Beckham donned retailer Target’s trademark khaki pants and red shirt combo to go undercover as a cologne salesman.

“Let me spray it on my leg, it smells so much better,” David (nicknamed “Ricky” for incognito purposes) tells unwitting shoppers. Surprisingly, quite a few bend down to take a wiff!

In an effort to explain his accent David Beckham tells shoppers he’s Australian, then is prompted by Ellen to slip into his best (albeit terrible) Texan accent. When a few shoppers start to suspect his true identity he tells them directly, “I’m not David Beckham. Stop spreading rumors!”

“If you stink, come on, buy cologne,” David Beckham chants loudly through the store as evil comic genius Ellen DeGeneres continues to instruct him through his earpiece. In the end the soccer star sheds his disguise as instructed shouting something that resembles, “I’m on a television show called Switcheroo!”

We have to say, David does a rather impressive job of juggling Ellen’s prompts while interacting with the customers. Not everyone would be so willing to make an (adorable) fool of themselves in public!

Do you think you would have known it was David Beckham pushing cologne in Target?