MTV scored a summer of huge ratings for its reality shows like Jersey Shore, so in lieu of adding any new video blocks to its already stuffed reality roster, they have ordered a set of six new series, one starring singer/songwriter Ke$ha. 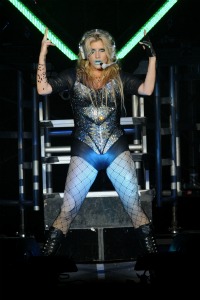 In the past several years, MTV has beefed up its reality program to the point where the M in MTV no longer stands for music. The channel, which once based its programming on premiering new videos for breakout and seasoned performers, is now concentrating heavily on a rotation of reality and scripted programming and according to The Hollywood Reporter, have signed on six more scripted series for the upcoming television season.

The summer was booming for MTV with the success of Jersey Shore season 4, Teen Mom, Teen Wolf and Awkward. Hot on the heels of their success with scripted television, the channel is hooking up shows titled Underemployed, Zach Stone is Gonna Be Famous, Catfish, Hoods, Wake Brothers and Wait Till Next Year.

One of the most anticipated new shows is called Hoods, where the past lives of favorite music, movie and television stars are shown by traveling back to their old neighborhoods. The first episode in the series will follow singer/songwriter Ke$ha’s journey bcack to her native Nashville, Tennessee.

Also hotly anticipated is Catfish, an adaptation of the movie of the same name for MTV. Stated Janollari of this exciting new series to The Hollywood Reporter, “The great thing about Catfish for us is that its an incredibly now topic. I think it will really impact out audience exactly where they live, which is online.”