The Lion King returned with a 3D makeover and the 17 year old Disney king ruled the box office, again. All those new releases we’ve been hearing about for weeks fell silent in the mighty Lion’s wake.

With The Lion King taking its rightful place at the top of the popcorn chain again, the much-hyped new releases fell hard at the box office the weekend of Sept. 18-22 . Drive managed to land in the top three, behind last week’s winner, Contagion. The Straw Dogs revamp eked into the top five, while Sarah Jessica Parker‘s I Don’t Know How She Does It didn’t do it for audiences — probably because the target audience was introducing the next generation to Simba, Nala and their wild pals. 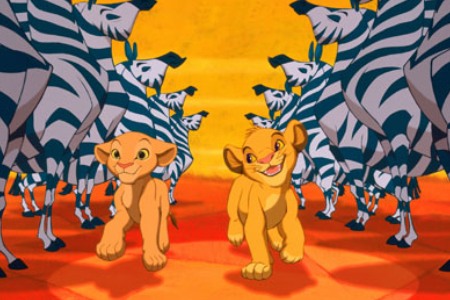 Disney brought The Lion King back for a two week run in 3D and in its third re-opening weekend, Simba once again claimed the crown. The Lion King broke records when it first came out in 1994, returned for a big IMAX run in 2002 and now, at a time when Americans are a bit worried in general, the message of Hakuna Matata resonated again. The Lion King (in 3D) banked $29.3 million, bringing the family fave up to a total of $357.8 million in 17 years.

Contagion spread like wildfire last weekend to take the win and it seems Steven Soderbergh and Matt Damon’s strain of fear is still stronger than anything the new releases brought to the big screen. The drama beat out the competition, slipping to second this week with $14.5 million.

Drive took third, staying in the game with its own viral kick. After taking Cannes Film Festival for a ride in May and even earning a standing ovation, the Ryan Gosling action vehicle had high hopes. With the Lion stealing its muscle, however, the festival fave didn’t get any ovations from the mainstream. It did manage to pull into third place, at least, with $11 million.

The Help spent another week in the top five, falling from second to fourth with a $6.4 million weekend. That brings the Oscar buzzing box office hit up to $147.4 million in six weeks.

Straw Dogs closed out the top five with a measly $5 million opening. The revamp, starring James Marsden and Kate Bosworth didn’t perform. This could be bad tidings for upcoming revamps Footloose, The Three Musketeers and The Thing.

Sarah Jessica Parker and her castmates worked the media circuit like mad last week, promoting their mommy comedy in daytime, primetime and late night, but I Don’t Know How She Does It just didn’t do it in theaters. While Box Office Mojo points to marketing confusion and questions why women would want to watch another woman struggle, SheKnows suspects Simba’s roar was the film’s biggest hurdle:  Whether or not the busy target audience was interested in I Don’t Know How She Does It, they were already booked for the weekend — taking the kids to The Lion King!

The Debt fell from fourth, taking seventh place with $2.9 million. Warrior dropped all the way down from third place to follow with $4.9 million. Colombiana closed out the top ten with $2.3 million.

Rise of the Planet of the Apes took ninth place, banking an additional $2.6 million. That brings its U.S. total to $171.6 million stateside, but Mark Walberg’s animal action is still battling The Smurfs overseas. Apes has taken a hit on the international front, but is currently at $391.3 million worldwide, with more debuts to come; while The Smurfs is set to break records. With $482.1 million worldwide, the little blue guys are sure to pass up Rio as the highest-grossing non-sequel of 2011.

Meanwhile, last week’s breakout hit, Kevin Hart: Laugh at My Pain, added more theaters, but saw a drop in numbers. The comedian should still be proud. With only 230 theaters, his stand up routine again made the top 20 and has so far banked $3.59 million, which beats super flop Bucky Larson: Born to Be a Star, which didn’t even make the top twenty in its second week in theaters and stands at $2.3 million, total.