Entourage’s Kevin Dillon wasn’t a fan of Jane Lynch’s comedy at the 63rd Primetime Emmy Awards. The actor was disappointed by a dig the host made at him and his cast members during last night’s ceremony.

Jane Lynch walked away from her first Emmy gig with some serious laughs under her belt. The Glee actress poked fun at TV’s finest on Sunday, including the cast of the long running (now defunct) HBO series Entourage. 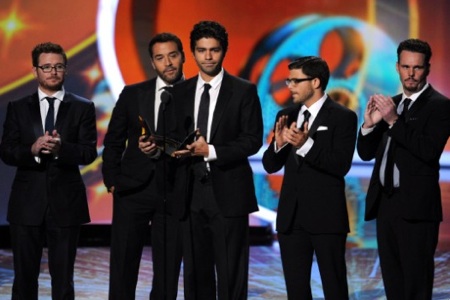 Last night, before the cast of Entourage walked on the stage, Lynch gave them a unique intro. She said, “A lot people are very curious as to why I’m a lesbian — ladies and gentleman, the cast of Entourage.” This resulted in laughter from various members of the audience including Entourage producer Mark Wahlberg.

According to E! Online (via MSNBC), Kevin Dillon, who played Johnny “Drama” Chase on the show didn’t find Lynch’s joke that hilarious.

“It was funny, but I think it’s not fair at the same time,” Dillon said. “We all have good senses of humor but I think the men of Entourage treat women well for the most part. Maybe she was going on season one when everyone in the world was like, ‘That show is so male chauvinistic,’ and everybody was down on us,” he continued. “But since then, E has had a longtime relationship. Vince has always treated women politely and even Turtle lately. I didn’t take offense but that’s not what the show is about.”