Justin Timberlake and Mila Kunis deny that leaked pictures depict him — or any part of him. 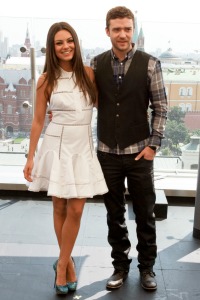 Recent reports have surfaced that supposed nude pictures of Justin Timberlake were hacked from Mila Kunis’ cell phone and the reports have drawn a response from the pair.

In a joint statement, the stars of Friends With Benefits said:

“At no time did Mr. Timberlake and Ms. Kunis exchange inappropriate texts or emails. The insistence that there is any inappropriate correspondence between the two parties is entirely false.”

“We would like to confirm that the photo addressed in the media of Ms. Kunis was in fact not from any phone but from an inactive email that has not existed in three years. In regards to the the other photos in question, they were never exchanged between the two parties.”

“In closing, Mr. Timberlake would like us to make it clear that while he might write songs about putting things in boxes, he never has and definitely doesn’t make a habit of taking any photos of them and sending them,” the joint statement says.

“Ms. Kunis would like us to add that while she is a fan of the song, she does not have nor has ever had photos of any male parts in her possession.”

In addition, Timberlake and Mila Kunis are planning on taking legal action once investigators get to the bottom of the purloined pictures.

read on for more justin timberlake