Character TV and film actress Frances Bay, best known for her roles in Seinfeld, Happy Days and Happy Gilmore has died at the age of 92. 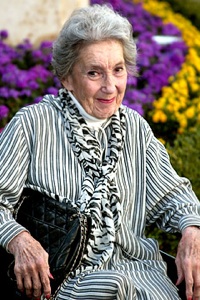 On Sept. 15, veteran character actress Frances Bay, passed away due to complications from pneumonia.

Bay was a native Canadian born Jan. 23, 1919, who moved to the U.S. when her husband Charles relocated for work. Bay began her entertainment career in radio and made her big screen debut in the 1978 Chevy Chase and Goldie Hawn film Foul Play.

Bay’s other notable roles include Grandma Nussbaum (to Henry Winkler’s Fonzie) on Happy Days, Grandma in Happy Gilmore and the resilient old woman Jerry Seinfeld fought for a loaf of bread on Seinfeld. To her credit, Bay has over 150 projects listed on her IMDB page, which is an amazing feat for any actor.

According to The New York Times, Bay received a Gemini Award (Canada’s version of the Emmy) in 1997 for her work on the series, Road to Avonlea. She then went on to receive a star on the Canadian Walk of Fame in 2008.

As the years progressed, Bay continued to work even after having a portion of her right leg amputated due to a car accident in 2002. She remained focused and dedicated to her craft. Bay was most recently seen on ABC’s The Middle, where she had a recurring role as Aunt Ginny.

Frances Bay’s death was confirmed by her cousin, Marly Zaslow. The actress’ husband died in 2002 and her son passed away while in his 20s. There are no immediate surviving family members.