Charlie Sheen made his big appearance onstage as a presenter at the 2011 Primetime Emmy Awards. He made his big apology to the cast and crew of Two and a Half Men and even said “Hi, Jon!” to former co-star Jon Cryer while on stage. 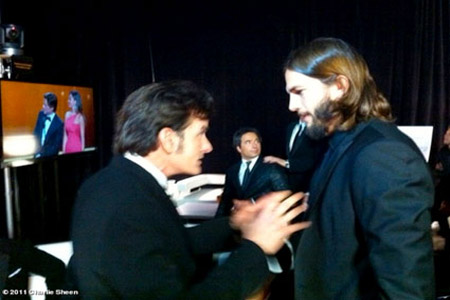 However, television cameras didn’t capture what happened backstage: Sheen bumped into new Two and a Half Men star Ashton Kutcher.

“Giving the new kid a little advice..! With @aplusk backstage at the Emmy’s…” Sheen tweeted, along with a photo of the old and new leads on the hit CBS comedy.

“Seriously… @aplusk great talking to you! We’ll all be watching! Make us proud!!” he continued.

Kutcher seemed to appreciate the kind words and tweeted back a message of his own.

“@charliesheen good to meet you too. Wishing you the best on your new gig,” Mr. Demi Moore wrote. “btw I’d love to connect with you at some point and talk about human trafficking and what @dnafoundation is working on.”

It’s nice to see that the pair can talk and get along without any visible awkwardness between the two generations of Men stars. No word on whether or not Sheen met up with former on-screen brother Cryer during the show, though Sheen’s former on-screen mother did have a few kind words for him.

“Elegant…elegant xxoo,” tweeted Holland Taylor, who plays Sheen and Cryer’s on-screen mother Evelyn Harper on Two and a Half Men.

“Holland, I am and always will be your greatest fan!! Thank you for all the love! xo c,” he wrote back.

“You will always have [my love],” she replied.

We can’t wait to hear what his “friends” have to say about him during his Comedy Central roast airing Monday night.