He’s not really a werewolf and he’s not really in love with Bella…? What? Taylor Lautner says buh-bye to the Twilight Saga and hello to the action thriller Abduction. Oh, and he got himself a new girlfriend, too.

While promoting his new film Abduction, Taylor Lautner recently discussed how much fun it was to work with his darling co-star Lily Collins. When asked what his favorite scene of the movie was, he answered, “I liked the romantic scene in the train.” The scene where he and Lily make out? That’s the one. Does this mean he and Lily are dating? 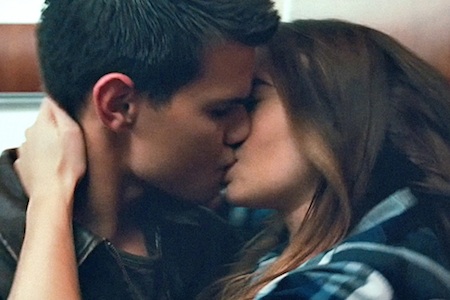 Abduction co-star Denzel Whitaker spoke out recently about Lily and Taylor being a couple. He said they have that adorable “teenage love in high school” vibe. SheKnows sat down with Taylor Lautner to discuss his new action thriller Abduction, “working” with Lily Collins and moving on from the Twilight Saga.

SheKnows: Are you excited about the premiere?

Taylor Lautner: I feel like I’ve been waiting forever for people to see this movie, and it’s finally here.

Red carpet interviews with the cast of Abduction at the premiere >>

SheKnows: How does it feel to be moving on from the Twilight series, now that the filming is all over?

Taylor Lautner: This movie was very different from anything I’ve done before. It was challenging.

SheKnows: Were you scared to film any of the stunt scenes?

Taylor Lautner: No, not at all. I wasn’t… [laughs] There were really no stunts that scared me, and that’s probably a scary thought. [laughs] 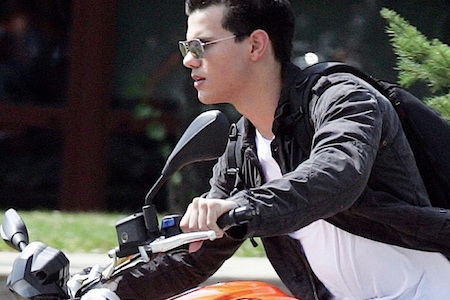 SheKnows: Do you ever have to fight to be able to do some of the more dangerous stunts? What about in the opening scene, when you’re riding on the hood of the truck?

Taylor Lautner: That was one stunt, and I’ve had this happen quite a bit, where they said, “You are absolutely not doing that. There is no way you’re getting on that truck.” Somehow, I was able to convince them to allow me to do it. So, they said, “We’ll let you do it, but you’re only going to go up to 20 miles per hour.” I was like, “Are you kidding me? I need to feel the adrenaline.” So, we actually went up going 50 or 55. 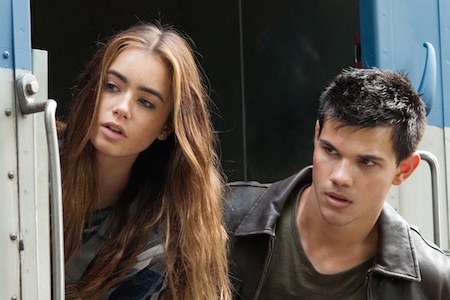 SheKnows: What was it like working with Lily? The love scenes are so different from the action parts…

Taylor Lautner: That’s what I love about this movie. It really has everything. It has the action. It has the romance. It has the thriller. It has the drama. Lily was great. She’s so talented.

SheKnows: So, you think the casting was pretty on the money?

Taylor Lautner: Everybody knew she was the right person for this role. Her role is so important. She’s with me the entire time. She’s on this journey with him. She did such an incredible job.

SheKnows: What kind of training did you do?

Taylor Lautner: A lot. There was physical training and there was emotional training. I started boxing about three months before we went to film. We did that same thing for wrestling and motorcycle riding. It was important to me. I wanted to show up for set actually looking like I knew what I was doing. 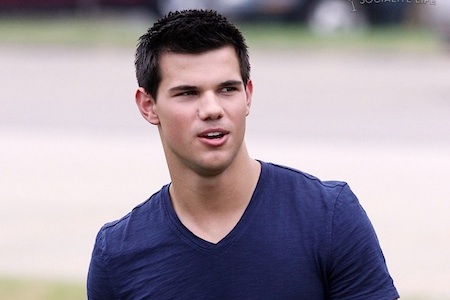 SheKnows: What about the emotional training?

Taylor Lautner: Emotionally, the biggest thing for me while I was filming was to be able to take a step back and just ask myself a simple question, “If I were in this character’s shoes, if I found out that my entire life was a lie, what would I do? Where would I go? Where would I start looking for answers? Who would I trust?” And the truth is, I could never answer that question. I have no idea. [laughs] And that’s exactly what this character deals with.

SheKnows: What is your favorite scene from the movie?

Taylor Lautner: I’m not going to be able to give you one. I love the scene with me and Maria Bello in my bedroom, when she comes in and tells me that she’s not my real mother. Very emotional. It was so great to be able to do a scene like that opposite Maria. I loved the boxing scene. I’m a huge fan of Jason [Isaacs]. I think he’s amazing. He’s hilarious. And I think that scene is just brilliant. And then I love the… sorry, but I love the romantic scene in the train. I do.