Charlie Sheen might be bringing his Adonis DNA to the 2011 Primetime Emmy Awards tonight. Will he be winning at the Emmys, too? 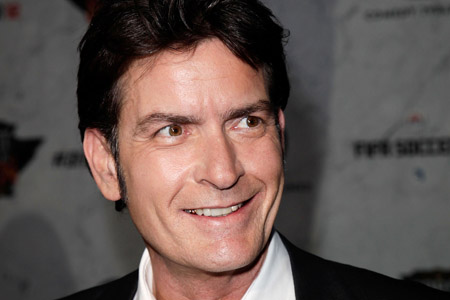 An Emmy appearance — along with Sheen’s other calm interview this week — is likely encouraging to LionsGate, the studio behind Sheen’s new show Anger Management. The studio is expected to shop it around to networks in the coming weeks and a normal Sheen is another selling point.

“I’m seeing my kids a lot more, mending fences with Denise and Brooke, just trying to move forward and prioritize what matters,” Sheen told the Today Show’s Matt Lauer in an interview last week. “I think that’s where the life is, you know, it’s in those quiet moments.”

We’re excited to see Sheen on the small screen again at the Emmys if the rumors are true. No word on what category he’ll present, though we’d love to see him give an award to former Men co-star Jon Cryer for Best Supporting Actor in a Comedy Series. The pair haven’t spoken since Sheen’s meltdown earlier this year.

“As friends do, I love him. He’s a great friend. All of us, none of us wanted to continue with the show if we felt like it was hurting him, and there was a point at which, we felt like, there’s no control over him,” Cryer told Ellen DeGeneres on her daytime show.

“We have not spoken. And I will accept an apology both public and private. But again, it was in the heat of the moment I imagine when he said…So I did not put a whole lot of credence in it at the time.”

What better place to apologize than the Emmys?

Will you watch Charlie Sheen present at the 2011 Primetime Emmy Awards?