The Real Housewives of Beverly Hills blonde bombshell Camille Grammer tells SheKnows how she’s moving on in life and love after her divorce. 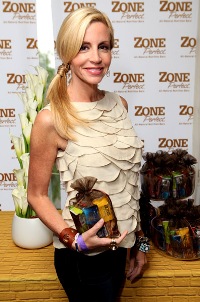 Things have changed a lot for Camille Grammer since her divorce from her famous husband, Frasier star Kelsey Grammer, earlier this year. For starters, she’s down to one nanny instead of four.

“I had four in the beginning and I took a lot of criticism for that,” Camille told SheKnows Saturday at Kari Feinstein’s Style Lounge. “That wasn’t just me that set that up.”

Camille says her ex was the one who enlisted the army of help. Now she only needs one nanny and her family to pitch in on daycare.

“It’s hard,” the Real Housewives of Beverly Hills star said. “This year we shot for almost seven months. I’m a single mom so I do have a nanny and my parents also come out to help when I’m working. Anytime I’m home I spend with the kids.”

In her free time, Camille also likes to stay active. The reality star sipped on zero calorie Omega Water and picked up some Zone energy bars while she was at the event, giving us some insight into how she stays so amazingly slim.

“I have been hiking a lot,” said Camille. “I love to paddleboard. I do some weight training. I like to dance. I stay active and try to work out at least 15 minutes a day.”

As for her diet, Camille said it’s a matter of circumstance.

“I call it the divorce diet,” she joked. “No, I have good genes and I stick to a protein, low carbs, and a lot of veggies.”

Still, she’s not one to rule out guilty pleasures.

“I’ve been eating a lot of Phish Food from Ben & Jerry’s and I love Sprinkles cupcakes,” Camille told us.

But her biggest indulgence lately is her new relationship. Camille told SheKnows she has a new man in her life who is nothing like her ex.

“I just recently started dating someone who’s lovely,” said Camille. “Caring, good with my kids, loyal, kind, somebody I can trust again. It’s only been a few months but he’s fantastic. He’s a regular normal guy, not in the business.”

And a low profile relationship is just what this housewife needs right now.

“I didn’t want to be with anyone who’s in the business,” Camille said. “I needed a break from that. I was married to Kelsey, a high profile actor. I’ve been there, done that. Right now it’s nice to be with somebody who’s a normal, nice person and who cares about me and my children.”

We wish you luck Camille!

FOR MORE ON THE REAL HOUSEWIVES OF BEVERLY HILLS

Bravo makes decision on The Real Housewives of Beverly Hills