Ryan Gosling has his pick of pretty much any lady in the land, so why is he talking about his ex-girlfriends and future children?

Ryan Gosling is riding high right now with rave reviews in movies like Crazy, Stupid, Love and the newly-released Drive; but these days he’s got another sort of production on his mind. 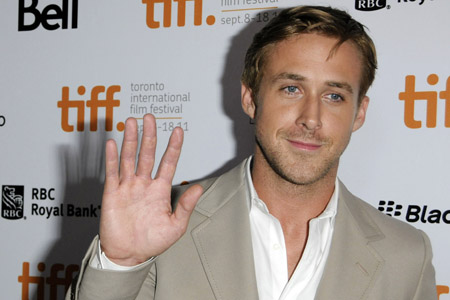 “There’s interest but I’m in a committed relationship with film. I’m giving as much to it as a marriage,” Gosling told U.K. newspaper The Times. Gosling was recently spotted holding hands with actress Eva Mendes at Disneyland.

After all, Gosling feels like his two ex-girlfriends — likely Sandra Bullock and Rachel McAdams — are too much to live up to.

“I had two of the greatest girlfriends of all time. I haven’t met anybody who could top them,” he continued.

That doesn’t mean Gosling isn’t ready for a family when that right girl comes along.

“I’d like to be making babies but I’m not, so I’m making movies. When someone comes along I don’t think I’ll be able to do both and I’m fine with that. I’ll make movies until I make babies. I have no idea when the handover will happen,” he said.

We know one thing: Ryan Gosling Jr. and Ryanita Gosling will be stand-up kids who break up street fights, even if it is embarrassing.

“I’m embarrassed. I think that guy really was stealing that other guy’s painting, so I shoulda just kept my nose out of it. It was sad, because it turns out that… I said to the guy, ‘Why you doing this?’ And he said, ‘Because he’s stealing my painting.’ and I said, “Well how do you know?” and he said, “Because he comes here every day and looks at my paintings,'” Gosling told MTV about his YouTube dust-up in Manhattan a few weeks ago.

“And then the guy from The Notebook shows up and makes it weirder. And it just… the whole thing, nobody wins. Nobody won.”

Do you think Ryan Gosling will make a good father?

Read on for more Ryan Gosling

Will Gosling rev our engines in Drive?
Ryan Gosling and George Clooney star in the Ides of March trailer
Hottie Ryan Gosling to star in ‘action thriller’