Modern Family’s Sofia Vergara, who plays Gloria Delgado-Pritchett on the hit ABC show, recently revealed to The Advocate Magazine her humorous side by candidly stating during her interview, “I look like a transsexual.” 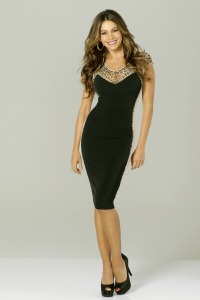 Sofia Vergara is marketed as every man’s dream woman, both in her role as token trophy wife on Modern Family and in her sexy ads for Diet Pepsi. But it is in her role of advocate for the gay community that she feels she’s taken most seriously.

Vergara recently sat down and spoke to The Advocate at length about her kindred feelings towards the LGBT community and even poked fun at herself and her exaggerated looks with a comment meant to be taken at shock value.

Said Vergara to The Advocate, “We should all be tolerant and respectful of people’s sexuality. We have to appreciate each other’s differences and accept people who have the courage to accept themselves. That’s beautiful.”

Due in part to its positive representation of a gay couple in primetime, Modern Family has more than its share of gay fans. Vergara is well aware of the impact she has on the community and even jokes about her exaggerated look with the magazine.

“I’ve always had plenty of gay fans, even back in Columbia,” she revealed. “Probably because I’m voluptuous and a little over the top. Gay men always tell me how fabulous I am.”

Several years ago, Vergara took her exaggerated look to a whole different level by playing a transsexual in a straight-to-DVD release called Grilled. Of that film, she has the most fondest memories of playing this over-the-top character and soon realized just how alike they really were.

Said Vergara, “I look like a transsexual anyway. I’m a woman, but I’m super-exaggerated with my boobs, my a**,  my makeup and my accent. When I get ready for an event, I always look at myself in the mirror and say, ‘I look like a transvestite.!’ I love it.”

She also revealed, “I’ve never wanted to be taken seriously as an actress! That never even crossed my mind. I don’t want to be serious. With my crazy accent, I’m so blessed that I even got a part like in Modern Family.”