Kirstie Alley says she is now a size 4. Fashion critic Tim Gunn isn’t buying it however, and is calling the actress out on her size statements while giving a lesson on a sneaky technique known as ‘vanity sizing.’ 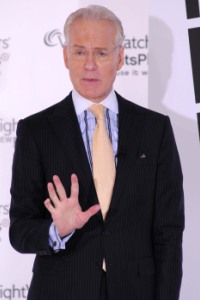 Tim Gunn isn’t falling for Kirstie Alley’s claims that she’s lost 100 pounds and now wears a size 4 dress. The Project Runway fashion consultant famous for telling contestants to ‘make it work’ is putting size in perspective for anyone willing to listen.

Yet it may not be all Kirstie Alley’s fault her sizing is off. The actress shared previously, “Before Dancing with the Stars, I bought these dresses from size 14 to 4… all the same dress, and I said, ‘You know what I really want? I really wanna be in this dress in a 4.'”

Tim Gunn explains, “There is a phenomenon out there right now that I call the lying deceptive shell game of vanity sizing. In fact a 4 is really a 6 or an 8.” The 58-year-old has even done an experiment to prove his ‘vanity sizing’ theory. He shares, “We took a size 8 dress from 1980 one from 1990 and one from 2000 and compared them and the difference was two and a half inches in the waist alone!”

So though the tag inside Kirstie Alley’s little dress may say ‘4’ Tim Gunn believes her true size is more like an 8 or 10.

At the end of the day Tim Gunn is supportive of Kirstie Alley’s weight loss, saying, “She looks fabulous. People are too size conscious. It’s all about how you look and more importantly how do you look in your clothes!”