Evan Rachel Wood has a new obsession — and his name is Justin Bieber. The actress opens up about becoming a Belieber and bisexuality in the latest issue of Marie Claire magazine. 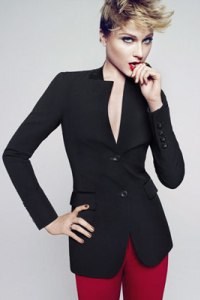 Evan Rachel Wood never set out to cause a stir with her bisexuality, or to become a Belieber. Yet today both things “are a big part” of who the True Blood actress is.

In the Oct. issue of Marie Claire magazine Evan Rachel Wood opens up about her bisexual status. “That’s a big part of who I am, and it always has been for as long as I can remember,” the 24-year-old shares.

Speaking of her first relationship with a woman Evan Rachel Wood confirms, “Yes. And it was wonderful. I mean, it was terrifying at first. Not because I thought it was wrong but just because I was intimidated by women. It’s a totally different arena! The approach is completely different than it is with a man but I finally let myself say, ‘You’ve got to go for this. It’s in you and it’s not going away.’ And it was wonderful.”

One person Evan Rachel Wood isn’t afraid to admit she’s fallen for is Justin Bieber, thanks to the 17-year-old singer’s Never Say Never documentary. “I ended up seeing it three times — in the theaters,” the confessed Belieber admits. “One of those times was the director’s cut, I’m not even kidding. I got obsessed with the kid.”

Somewhere there’s a clip of Evan Rachel Word dancing to Bieber’s beats, thanks to director/co-star The Ides of March George Clooney. She shares, “He loved to keep the camera rolling when we didn’t know it was on. I’m pretty sure he has me dancing to Justin Bieber on film. We were playing around and joking with Ryan [Gosling] off-camera and started doing this dance. It got really quiet, then George poked his head around the corner and said, ‘Enjoy the DVD!'”

Work on the film was rough for Rachel, who was tasked with making out with fellow co-star Ryan Gosling. “Yeah, it was awesome,” she isn’t afraid to admit. “We had fun. Ryan’s amazing because he has this way about him that’s incredibly attractive, not just in a sexy way but he’s smart, he’s cool, he’s talented, he’s really creative, and he has this mysterious quality to him that drives people crazy. So yeah, it wasn’t a hard day at work.”