Heather Morris is loving life on Glee, but should the man of her dreams ask her to quit showbiz for the quiet married life she’d throw away all the fame in a flash. Just who is this mystery guy? 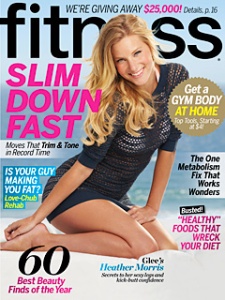 Heather Morris’ boyfriend, Taylor Hubbell, holds the future of Glee‘s Brittany in his hands. Should the baseball player for the University of Louisiana at Lafayette decide to propose to the actress and ask her to leave fame for good she’d happily oblige.

Heather Morris said to Fitness magazine, “I want to marry him so bad. That’s what I really care about.” Despite finally feeling that her career, which moved from back-up dancer for Beyonce to Glee star in just a handful of years, is “in a good place” the 24-year-old would walk away for love.

Heather tells the magazine, “I want to marry Taylor and have kids with him. I love acting, but if it affects my relationship, then I won’t continue doing it.”

A willingness to leave her career behind for the promise of happily ever after isn’t the only bomb Heather Morris dropped during the interview. As if she were chatting about hair styles the actress revealed she’s not only had breast implants, but decided to have them removed before the age of 24.

“Implants were something I thought I wanted when I was younger, and now I don’t,” Heather, who recently posed with a black eye for a series of controversial photographs, says. “It was hard being active with them, because my chest was always sore. It hurt a lot, and I didn’t like always being in pain, so they had to go!”

The one workout she has yet to try has been promised to her by “sister” and fellow Glee star Gwyneth Paltrow. “The Tracy Anderson Method [a routine that incorporates aerobics and dance moves],” Heather Morris says of her dream workout. “Gwyneth Paltrow promised she’d take me, but she’s so busy that we’ve yet to go. Gwyneth has a killer body, so I’m willing to try whatever she does to look like that! She’s so cool and down-to-earth, I feel like she’s my sister.”

On the one thing she learned during her time as back-up dancer for Beyonce the fitness junkie shares, “That putting in the time really pays off. Beyonce is so focused. We’d have 12-hour days of nonstop dancing, and she was right there next to us from start to finish. I think that’s why she’s so mesmerizing on stage; she gives everything her all.”

Sounds like a fabulous life, right? Here’s hoping Heather won’t have to choose between love and career!