Brad Pitt says he has turned his back on religion after a strict Christian upbringing. 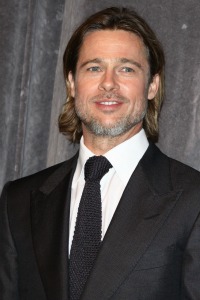 Got God? Brad Pitt doesn’t. The Moneyball actor says he has turned his back on the religion his parents raised him under because he doesn’t think it’s right to dictate how other people live.

“There’s a point where you’re un-tethered from the beliefs of your childhood,” Pitt told Parade in the same interview in which he implied his marriage to Jennifer Aniston was “pathetic” and “dull.”

“That point came for me when it was finally clear my religion didn’t work for me. I had questions about Christianity that I could not get answered to my satisfaction, questions that I’d been asking since I was in kindergarten. I realized it didn’t feel right to me, that one question just led to another. It was like going down a rabbit hole, each answer provoking another question. There were things I didn’t agree with.”

Pitt said that he would rather figure things out for himself — things like sex, for example.

“My religion was telling me what not to do — what not to even think about doing. Those are the things I would try, because that was my nature,” he said. “I had to experience things to know what would work for me — say, something as simple as premarital sex. I can figure out what works or doesn’t work.”

Pitt, who was raised Baptist, says he doesn’t have a problem with religion itself, but with some of the byproducts of it.

“I don’t mind a world with religion in it. There are some beautiful tenets within all religions. What I get hot about is when they start dictating how other people must live,” Brad said, referring to gay marriage. “You grow up in a religion like that and you try to pray the gay away. I feel sadness for people like that.”

By the way, Brad Pitt apologized for the Jennifer Aniston comments. He’s on a roll with the controversial comments while promoting his new movie Moneyball, in theaters Sept. 23.