Henry Winkler has received the highest honor a foreigner can receive in Britain: Honorary Officer of the Most Excellent Order of the British Empire. 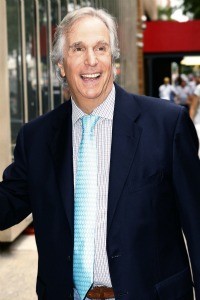 Hey, that’s Sir Fonze to you. Henry Winkler has been honored by Queen Elizabeth, who awarded the prolific actor with the highest honor a foreigner can receive in the Realm. Winkler is now an Honorary Officer of the Most Excellent Order of the British Empire.

Why did he receive such a huge honor? Winkler has been quite busy the last couple of years touring the U.K. to educate people about dyslexia, from which he himself suffers, and other learning disabilities.

In fact, Winkler has authored 17 children’s books about dyslexia, featuring the character Hank Zipzer having adventures based on Winkler’s own childhood struggles.

“Henry Winkler is living proof that difficulties can be overcome and that for those suffering disability and self-doubt, happy days can nevertheless lie ahead,” said a press release from the British Embassy in Washington.

“Receiving this honor is a very humbling experience,” said Winkler. “My goal when I started working with children was never to bring accolades on myself, but instead to change how people think about those around them for whom learning is a struggle. I am flattered to have had my work recognized in this manner, and hope to continue showing kids that their learning difficulty isn’t a disability.”

Unfortunately Winkler did not receive his award from the Queen herself. The honor was bestowed during an investiture ceremony at the British Embassy in Washington by Ambassador Nigel Sheinwald.