Paul McCartney declared his intentions to make Nancy Shevell his third wife today at London’s Marylebone Register Office. It was the same place he married first wife Linda back in 1969. 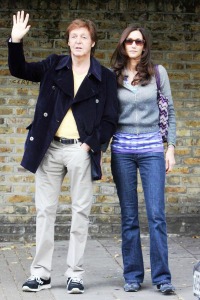 More than 40 years ago in 1969, under a sea of flashbulbs and with her daughter Heather in tow, Paul McCartney wed Linda Eastman at the Marylebone Register Office in London. Fans mourned the loss of the cute Beatle to the American photographer and boycotted the ceremony.

Flash forward to today and Paul McCartney has made the same declaration of marriage, but this time to another American, Nancy Shevell. Shevell and McCartney posted a notice of intention to marry at the office this past Wednesday.

Officials at Westminster Council said the notice was posted on Sept. 14, so officially, the couple can marry any time after Sept. 30 of this year and they have one year to make it legal between them.

The document filed states the singer, listed by his given name of James Paul McCartney, is a “business executive”. The couple’s address is shown as McCartney’s London home.

There is already a listed officiant of the ceremony, Alison Cathcart, Westminster City Council’s superintendent registrar, who was quoted as saying, she is “delighted that Paul and Nancy have chosen Marylebone Town Hall for their special day. Lots of couples get married here because of the venue’s reputation as a rock and roll place to tie the knot and this ceremony will certainly continue that legacy.”

She also stated to the U.K.’s Mirror, “It’s a special place. It’s a beautiful, imposing building which gives an air of importance just right for ceremonial occassions.”

Other fashionable British celebs who have married there? McCartney’s mate Ringo Starr and Oasis’ Liam Gallagher, who married both of his wives there, eleven years apart. Also wed there, Chrissie Hynde, David Gilmour and John Hurt