Kelly Brook has turned into one seriously sexy snake as the latest celebrity to strip down (and in this case get painted up) in support of PETA. See Kelly Brook slither below! 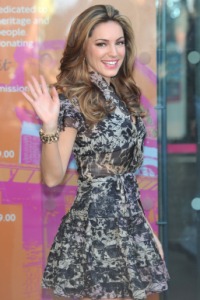 Kelly Brook and PETA want to know, “Whose skin are you in?” The latest campaign launched by the People for the Ethical Treatment of Animals features the topless model/actress slithering in painted snake skin. See the sssssexy photo below!

At Thursday’s unveiling of Kelly Brook‘s PETA photos, the 31-year-old said, “It makes my skin crawl to think about the violent ways snakes, lizards, alligators and other exotic creatures are raised and killed for boots, bags and belts.”

Supporting the campaign message “Animals belong in the wild, not in your wardrobe” Kelly Brook continued, “Our message is to support the designers who are creative without being destructive, and go for the great fakes that pay tribute to the animals’ beauty without killing them.”

It’s been a rough year for the Piranha 3D actress, who lost the baby girl she and rugby player Thom Evans were expecting in May. Those not overly familiar with Kelly Brook may also recognize her from The Italian Job or Deuce Bigalow: European Gigolo. Certainly from now on she’ll be remembered as the sexy lady in the PETA snake skin photo!

Other famous faces who’ve stepped up to support PETA include Brooke Hogan, Glee‘s Lea Michele and Jillian Michaels. Yet despite ample star power designers and fashionistas continue to use and purchase leather, fur and animal skins.

Does seeing a celebrity doing PETA’s campaign make you think twice about purchasing an item? 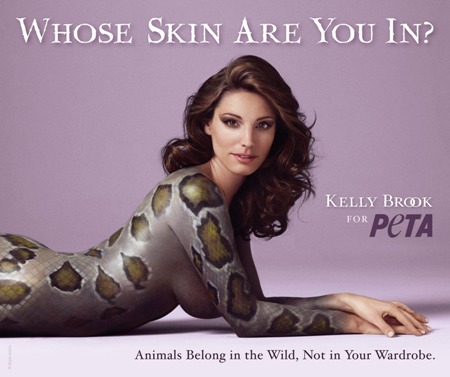 What do you think of Kelly Brook’s sexy snake PETA photo?