Sarah Jessica Parker appeared on Anderson Cooper’s new talk show and confessed that figuring out the schedule of her three children is similar to being an air traffic controller. We can totally relate!

Sarah Jessica Parker is one busy mom! Between caring for her three children with husband Matthew Broderick (James Wilkie, 8,  twins Tabitha and Marion, 2), promoting her new movie I Don’t Know How She Does It and being a designer, we have to ask: How does she do it? 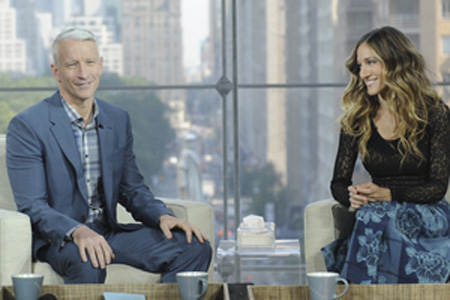 Parker appeared on Anderson Cooper’s new talk show and confessed that her schedule takes some juggling. When asked what a “typical” day was like at the Parker-Broderick house, she confessed it was like a giant puzzle.

“A typical day, if I’m not shooting a movie is, you can all tell me the same story, you try to wake up earlier than the kids to have maybe 20 minutes to catch up with the world,” she says. “Then, the alarm clocks go off and there are children to be fed and get out the door somewhat on time. Forcing children to brush their teeth, put on winter coats when they don’t want to, sometimes holding them down and shoving coats on them, it’s beat the clock all day.”

“We walk everyday to school, one of us usually,” Parker said. “Now, my daughters just started school last week, so now we have to try to figure out who takes what children on what day because they’re not at the same school yet. You are an air traffic controller, that’s what you function. You’re like the puzzle of family life, which is organized mostly inside, typically speaking, a woman’s head, is complicated —  but there’s enormous amounts of joy that come with it.”

The former Sex and the City gal admits she does have some help with the kids. “Yeah we have amazing babysitters that we are incredibly reliant upon and we are incredibly lucky to have, we like that they get to go home at night and this is what works for our family. Every family has a different symphony that exists in their home and this is ours.”

Watch SJP chatting with Anderson on his show on September 15th: