Three of the Real Housewives of New York were axed from the hit Bravo show today. Who is taking their places?

It looks like Bravo’s Andy Cohen isn’t feeling the weirdo drama on The Real Housewives of New York: three of the ladies have been axed. 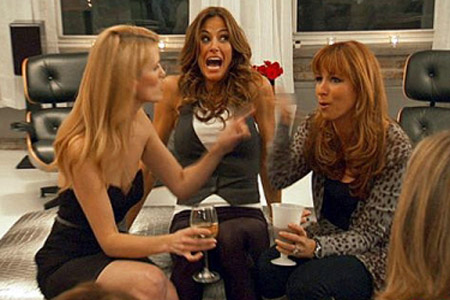 “Sources inside Bravo tell me that Jill Zarin, Alex McCord and Kelly Bensimon have all been let go from the series and will not be returning as fulltime cast members next season,” Shuter revealed. “The source explained that the women were directly contacted by Bravo on Thursday morning with the news — they had no idea the pink slips were headed their way.”

Ouch. Rumors had circulated that Cohen & Co. were looking to make changes to the show, but nothing was set in stone.

“The rumors about Bravo dropping me from The Real Housewives of New York City as well as rumors that I am leaving the show are simply not true,” Zarin, 48, told US Weekly last month.

“Everything that has been reported is simply rumors, gossip and speculation. I personally have been busy with my shapewear line, Skweez Couture and am still very much part of the Bravo family.”

Sonja Morgan, Turtle Time Ramona Singer and LuAnn de Lesseps are the only three cast members left as of now. We’re sure there are plenty of vapid women ready to take their places.

“But according to another insider, the three housewives who were not invited back were told that they could possibly be reinstated next season if any of the new cast members don’t work out — and we’re sure that Zarin, McCord and Bensimon have their fingers crossed that they won’t,” Shuter added.

It has to hurt: Bethenny Frankel left the show and received gazillions for spin-off shows, along with her ever-growing line of Skinnygirl products. Zarin and the gang get zip.

Are you happy with the changes on The Real Housewives of New York?

Read on for more Real Housewives