Anderson Cooper revealed his new wax figure, courtesy of Madame Tussauds in New York City. What did he think of his waxy twin? “I look like a jerk!” he joked.

Anderson Cooper revealed his new wax figure for Madame Tussauds in New York City on his new talk show, Anderson. With Kathy Griffin looking on, Anderson said that it was an “incredibly detailed process” to get his wax figure made, including the Tussauds team taking over 250 pictures and detailed measurements to perfectly capture his image. 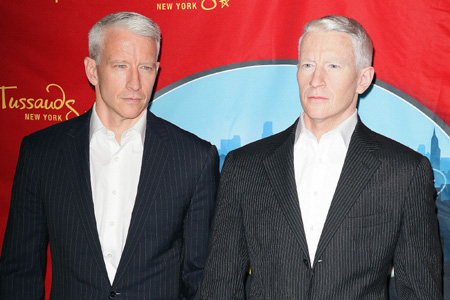 After the team worked on his wax figure for three months, the big reveal took place. Anderson’s reaction?

“Wow…that is really creepy!” he said. “Is that what I look like?! It’s a little freaky to see this, I gotta say, I look kinda like a jerk!”

Griffin jumped in, joking, “Yes, this is what you look like when you’re laughing,” she said. “I love that he’s giving you the ‘Blue Steel’ from Zoolander.”

At the unveiling of his was museum at Madame Tussauds in NYC yesterday, Anderson, who has the nickname Silver Fox, joked about his hair color.

“I used to think I had salt and pepper hair… but seeing this, I realize I have no pepper left!”

The CNN anchor, who recently went tanning with Jersey Shore‘s Snooki, had to get in one more prod at his doppelganger. “Is this really what I look like? This is what I’ll look like when I’m dead,” he joked.

Tell us: Do you think Anderson Cooper looks like his wax figure?