Sienna Miller opened up about being a victim of phone hacking on the Today Show. 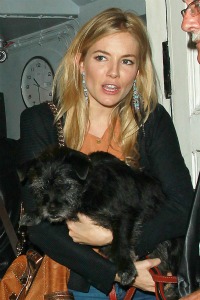 Scarlett Johansson’s nude photos leaked from her hacked cell phone this week, as did those of actress Mila Kunis. One star knows exactly how violated they feel.

Sienna Miller was hacked by the British Tabloid News of the World and says it left her “incredibly paranoid,” not knowing if she could trust even her closest friends and family.

“At the time I was incredibly paranoid and stories were coming out that nobody knew about apart from my mother, my sister, my boyfriend and my best friend,” she said on the Today Show Thursday.

“There were times when I would sit down with those four people and accuse one of them of selling stories. And it’s terrible, but I would also tell my best friends things and see if they came out but they never did.”

How did she finally figure out what was happening? She wasn’t getting voicemails anymore.

“The voicemails were being listened to [by the hackers] and were no longer new so wouldn’t be in my inbox,” she said.

“I received a box about this big of notes taken by private investigators,” Sienna said stretching her hands wide.

“My phone numbers, access numbers, pin numbers, passwords, passwords of my friends and family, work colleagues… I mean this web of interception stretched for miles. And very personal information on notes.”

As bad as it was for her, Sienna knows it was even worse for hacking victims who were targeted because of their involvement in horrific crime stories.

“On a personal level, just that feeling of violation… it was bad for me,” she said. “But what has come to light now obviously is that victims of crime were also being hacked and that’s atrocious. That’s on another level.”

Miller sued Rupert Murdoch’s media conglomerate and was awarded $150,000 in damages plus an apology after refusing to settle out-of-court.