Back when Guns N’ Roses were the hardest partying band in rock and roll, they had a king of the night time world. That king was bassist Duff McKagan, who now reveals all in a new biography due to be released on October 4. 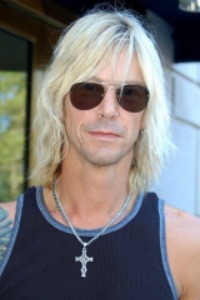 Duff McKagan may today be the hard-hitting bassist of supergroups Velvet Underground and Loaded, but it was when he was in a little band called Guns N’ Roses that he was best known for several things. Some of them are unmentionable here, but most involved partying harder than any other member of the band.

McKagan has now cleaned up his act and has penned an autobiography, set to be released on October 4, called It’s So Easy (And Other Lies).

He revealed to Billboard.com, “Mine’s not really a Guns N’ Roses book, where I think Slash‘s (Slash) really was…and I haven’t read Steven Adler’s (My Appetite For Destruction). “

While McKagan now writes regular financial advice columns for Playboy.com and SeattleWeekly.com, music is never far from his heart. He is currently involved with a new band called Loaded and this past April they released their CD The Talking.

McKagan felt like writing this book was a cathartic experience, stating, “It was pretty gut-wrenching to write some of this stuff, just because I hadn’t faced any of it until I had to write the book. I didn’t throw anybody under the bus. There’s some things you just don’t break confidences on, even if you’re warring with someone.”

One big reveal is one that longtime Simpsons fans will enjoy. As McKagan revealed for the first time, “When Guns N’ Roses began to break into the public consciousness, I was known as a big drinker. In 1988, MTV aired a concert in which Axl introduced me, as usual, as Duff ‘The King of Beers’ McKagan. A production company working on a new animated series called me to ask if they could use the name ‘Duff’ for a brand of beer in the show. I laughted and said of course, no problem. The whole thing sounded like a low-rent art project or something. I mean, who made cartoons for adults? Little did I know that the show would become The Simpsons.”