Brad Pitt tells Parade that his life with Jennifer Aniston was “pathetic.” 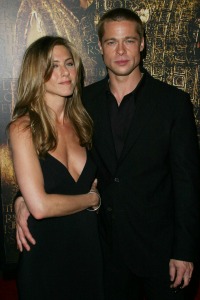 Remember when Jennifer Aniston said that Brad Pitt was missing a sensitivity chip? He apparently has yet to find it.

In this week’s issue of Parade magazine, Pitt pretty much says he was miserable and boring when married to Aniston.

“I spent the ’90s trying to hide out, trying to duck the full celebrity cacophony. I started to get sick of myself sitting on a couch, holding a joint, hiding out. It started feeling pathetic,” he said. “It became very clear to me that I was intent on trying to find a movie about an interesting life, but I wasn’t living an interesting life myself. I think that my marriage [to Jennifer Aniston] had something to do with it. Trying to pretend the marriage was something that it wasn’t.”

“I put much more emphasis on being a satisfied man,” Pitt continued. “I’m satisfied with making true choices and finding the woman I love, Angie, and building a family that I love so much. A family is a risky venture, because the greater the love, the greater the loss. That’s the trade-off. But I’ll take it all.”

He tops it off by waxing poetic on his eternal, undying love for Angelina Jolie, who he met on the set of Mr. and Mrs. Smith while he was still very much married to Aniston.

“One of the greatest, smartest things I ever did was give my kids Angie as their mom. She is such a great mom. Oh, man, I’m so happy to have her.”