Prince Harry’s birthday is today. How will he celebrate? 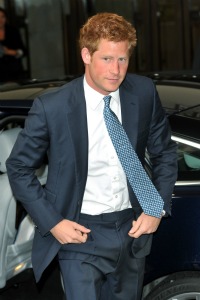 Happy birthday Prince Harry! Our favorite ginger turns 27 years old today, and the world is wondering how he will celebrate.

Fresh off a wild vacation to Croatia in August where he fell into a pool at a nightclub fully clothed then climbed out and kept dancing in his soaking wet togs, it wouldn’t be surprising to see the Prince partying hard.

However, the spare heir probably won’t have time to hit the club circuit tonight. We hear that Harry is stuck on base at the Royal Air Force’s Wattisham airfield in the rural area of Suffolk, England. Harry has a bit more training to do as an Apache helicopter pilot — duty calls, you know.

There’s nothing wrong with celebrating one’s birthday belatedly, of course, and American Harry Hunters can help the Prince do just that when he comes to the USA in October. His royal hotness will be in Southern California and Arizona for an additional eight weeks of Apache training.

Now that Harry is single — he and Chelsea Davy broke up earlier this summer — he will need a new party partner. He seems to have a penchant for blondes, even hooking up with a blonde lingerie model after his romance with the blond Davy wrapped up. Perhaps Harry’s trip to America is the perfect opportunity for him to partake in something new, like a lovely brunette? Wrap yourself in a bow and you’ll be the perfect birthday gift!

Regardless of how he celebrates, we do wish His Royal Highness Prince Henry Charles Albert David of Wales the happiest and most regal of royal birthdays.