Lion King 3D hits theaters this Friday to introduce a new generation to Mufasa, Simba and the whole gang of loveable animals and infectious songs. 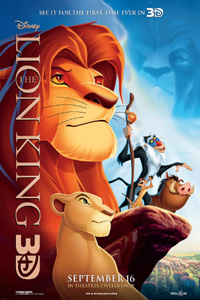 Hakuna Matata! The Oscar-Award winning Disney classic Lion King has been re-released to movie theaters in 3D form for two weeks starting this Friday, followed by the release of the Blu-ray on Nov. 18th.

The entire family will enjoy the heartwarming story of Simba, a lion cub who must search for his own identity (with the help of some colorful characters) after being tricked into thinking his father, Mufasa, has been killed.

The voices bring the story to life, with Matthew Broderick as Simba and James Earl Jones bringing his rich voice to the character of the great Mufasa. Nathan Lane provides comic relief as the lovable wart hog Timon, while Jeremy Irons nails it as Mufasa’s evil brother Scar. Jonathan Taylor Thomas voices the young Simba, while Cheech Marin and Whoopi Goldberg also lend their voice talents to the movie.

Besides the amazing voices, characters and plot, the songs are infectious and guaranteed to be loved by a new generation of kids. Classic Lion King hits like Hakuna Matata, I Just Can’t Wait to be King and Elton John’s ballads Can You Feel the Love Tonight and The Circle of Life may cause you to bring out the tissues.

If you caught this movie in 1994, enjoy it again (this time in 3D!) with your kids this Friday.