It was the album that defined a generation. Nirvana’s Nevermind was released twenty years ago this month and Universal Music is repackaging the original disc into a 4-CD/1-DVD edition, with loads of bonus features to enjoy. 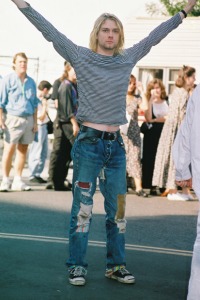 It was their major label debut and second album, but you would have never known it the way Nirvana rolled out Nevermind back in 1991.

Nevermind, from its tongue-in-cheek cover of a baby bobbing for a fishing hook with money attached to it, to the way each song hit you over the head like a freight train, became an instant music classic and launched Nirvana into rock superstardom.

Kurt Cobain, Dave Grohl and Krist Novoselic were a force to be reckoned with in the music world. They worked hard, they played harder and their “I don’t care” attitude was just what the music world needed at that place and time.

Released in September 1991, Nevermind has since sold more than 30 million copies and has spent 253 weeks on the Billboard 100 chart. The new release is due out on September 27th, the original release date of the first CD. There are several different ways you can purchase your anniversary edition.

The first is a digital CD remaster of the original album. Then there is a 4-CD/1-DVD super deluxe edition that contains unreleased recordings, old b-sides, alternate mixes, radio interviews, rare studio takes and live recordings.

The super deluxe editions will be numbered and will also include the demos recorded before Nevermind. The DVD includes all four Nevermind videos, a BBC recording and a live 1991 Halloween concert at Seattle’s Paramount Theeatre. There is also a 9o-page book included.

If that isn’t enough, you can also choose from a 2-CD deluxe edition, a 4-LP vinyl edition, a remastered CD of the original album, as well as digital versions of all the above mentioned CD’s.

Since Kurt Cobain’s untimely death in April of 1994, the other two members of the bank, Krist Novoselic and Dave Grohl have each made their mark in the music world. Grohl as the lead singer and songwriter of the amazing Foo Fighters and Novoselic, as a musician, writer and political activist.

Check out Nirvana’s breakout video from Nevermind, Smells Like Teen Spirit, below.