Sarah Palin is a cocaine-loving, pot-smoking woman with a certain fetish, alleges the author of a new tell-all book on the politician. 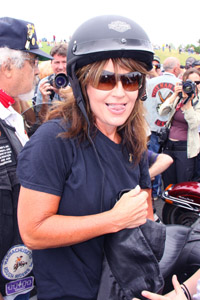 The Palins can’t catch a break: first, Bristol Palin’s baby daddy, Levi Johnston, wrote a tell-all alleging that his former girlfriend got pregnant on purpose to upset her mother.

Now? Author Joe McGinniss has written a book about Sarah Palin, titled The Rogue: Searching for the Real Sarah Palin — and boy, his accounts of Sarah’s behavior during her younger days would make a stripper blush.

According to a report in the National Enquirer, Palin slept with future NBA player Glen Rice because she had a “fetish” for black men.

Sarah hooked up with Rice, a 6-foot-8 junior at the University of Michigan, while he was in town for the 1987 Thanksgiving weekend “Great Alaska Shootout” basketball tournament, according to the book.

McGinniss quotes a friend as saying Sarah had “hauled his [Rice’s] ass down.” While the pal coyly states:

“I can’t say I know they had sex,” the friend is also quoted as saying: “I remember Sarah feeling pretty good that she’d been with a black basketball star,” according to the source.

Their encounter reportedly occurred in the dorm room of Sarah’s younger sister Molly at the University of Alaska Anchorage, according to the book.

Rice apparently confirmed the tryst. “He’s quoted as saying he didn’t think Sarah harbored any bad feelings over being with him because he was black. And he remembers only nice things about Sarah, recalling her as ‘gorgeous’ and saying she was a big crush of his at the time,” according to the magazine.

We can believe the one-night stand part is true; yet another rumor seems to play off Palin’s hunting and oil-loving Alaska roots.

Before she was elected governor, the author states Sarah was seen snorting cocaine off an overturned 55-gallon oil drum while snowmobiling with pals.

The book names a longtime associate of the Palins as saying Todd, who was arrested for DUI in 1986, used cocaine and “was on the end of the straw plenty.”

Cocaine on an oil drum? Come on– that’s the stuff of Hollywood.

We’re sure Sarah knows how to party, but cocaine? That’s a pretty big idea to grasp.

The third big bombshell in the book is that she had an affair with Todd’s business partner that led to the end of the business.

“McGinniss quotes a friend of Todd’s as saying Sarah’s husband was embarrassed by the affair, which occurred around 1996 and lasted as long as six months,” wrote the Enquirer.

There’s no question that McGinniss was looking for the dirty dirt on the Palin family — he moved next door to them in Alaska, after all. He doesn’t make any apologies for his reasoning behind the book.

“No matter how much my book sales might benefit from a Palin presidential campaign in 2012, I sincerely hope that the whole extravaganza, which has been unblushingly underwritten by a mainstream media willing to gamble the nation’s future in exchange for the cheap thrill of watching a clown in high heels on a flying trapeze, is nearing the end of its run,” McGinniss wrote in the final chapter.

Regardless of his feelings toward the family, it’s not likely to affect whether or not Sarah runs for president in 2012.

“She’s resilient as hell. Because of who she is and her followers and being a public figure with incredible star power, this just will add to the aroma so to speak, coming from the kitchen,” said Thom Serafin, political analyst and owner of Serafin & Associates PR, to RadarOnline.

“You’re not going to put her away with a book based on anonymous sources,” he continued. “The whole thing is sort of comical. Some of it may or may not stick depending on what people want to believe.”

Who do you believe: Sarah Palin or author Joe McGinniss?

Read on for more Palin drama