Dancing With the Stars hottie Mark Ballas has reportedly broken it off with Pia Toscano for his new partner, Kristin Cavallari.

Dancing With the Stars pro Mark Ballas seems like such a sweet guy though he’s beginning to look like a bit of a player. Ballas, 25, broke off his five-month relationship with American Idol castoff Pia Toscano earlier this month. 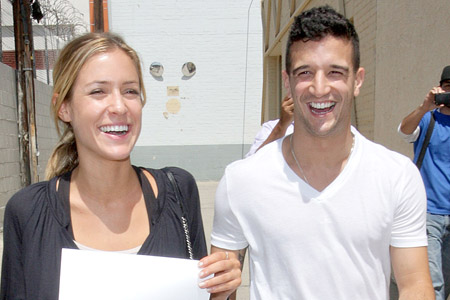 “They both decided with everything going on that they couldn’t give each other what would be fair,” a source told People. “They mutually decided this.”

We wonder how Toscano is really taking the break-up — after all, Ballas is reportedly cozying up to his current Dancing With the Stars partner, the also newly-single Kristin Cavallari.

“She was sitting on his lap while he was nuzzling her neck,” a source told Star. “They were having dinner with Derek Hough but didn’t pay him any attention. They were consumed with each other. You can tell she is really into him. Kristin was having a great time! They definitely look like more than friends!”

Cavallari’s friends are calling foul, telling Celebuzz that the rumors are “not true.”

Ballas himself downplayed any potential romance.

“No, none of that,” Ballas told E! News recently. “We’re just friends.”

For now. Let’s wait and see how much chemistry they have when Dancing With the Stars starts next week.

Do you think Mark Ballas and Kristin Cavallari make a good couple?

Read on for more Dancing With the Stars