Susan Lucci apparently can’t let the past stay in the past, according to a new report.

Aren’t mothers supposed to be, oh, motherly? Don’t tell Susan Lucci that – she apparently still harbors a bunch of ill will toward her former on-screen daughter, Sarah Michelle Gellar. 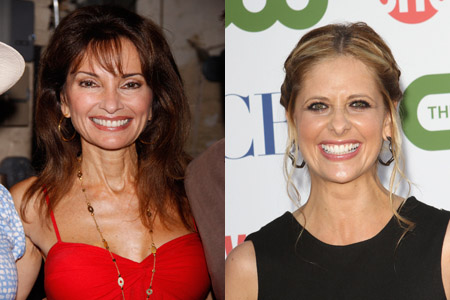 The new star of Ringer played Kendall, the daughter of Lucci’s character Erica Kane, starting in 1993.

“Back then, Susan was in full diva mode,” a source told the National Enquirer. “She trampled right over Sarah, criticized her looks and her acting, and made her life miserable.”

Maybe Lucci was just method acting? After all, Kendall was conceived from a rape.

“It’s not a time Sarah looks back at fondly,” the source added. The two didn’t speak for years, until Gellar called Lucci when All My Children’s cancellation was announced earlier this year. The two agreed to put the differences aside, according to the tabloid.

“What, you don’t have a regular role for me?” Lucci reportedly joked to a laughing Gellar. However, that truce didn’t last long.

“When Sarah came on to do a scene recently with her friend Eva La Rue, Susan never showed up on the set,” a Gellar friend told the Enquirer.

“While Sarah doesn’t have any ill will toward Susan, it appears Susan still is holding a grudge.”

Maybe Lucci’s just jealous of Gellar’s continued success? Sure, Lucci has been continuously employed by the soap since 1970, but she hasn’t found the same success in other roles. Lucci called out the rumors in a TV Guide interview, claiming they were false.

“I never had any idea where that came from. I don’t know anything about it. I really was hoping that she and Alicia Minshew [who has played Kendall since 2002] and I would have something to do together. That would have been funny,” she told the magazine.

We know celebrities always spin bad press, but Lucci wasn’t shy about letting AMC writers have it during the same interview.

“The fans were very upset about it because they didn’t recognize any of the characters [from the way they were being written]. I think that it was clear from the focus groups and the falling ratings that the show was in the hands of the wrong head writers,” she said. “If you could listen to the focus groups, you’d know something was off. I felt it was allowed to go on too long.”

So, guess Lucci’s first stop won’t be on Ringer?

What do you think: Is the feud real, or just another tabloid creation?