Redmond O’Neal has tested positive for drugs in rehab and may be sent to prison.

Has Farrah Fawcett’s only son used up his last chance? Redmond O’Neal tested positive for drugs at his court-ordered in-patient rehab — and now he could go to jail for a year. 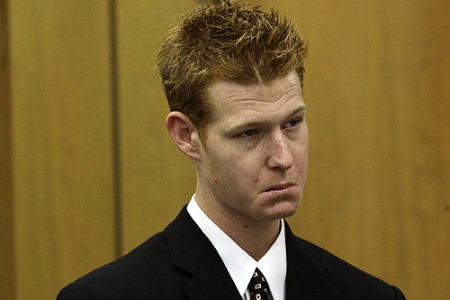 Redmond was arrested and pleaded no contest to felony drug possession and was sentenced to the in-patient rehab program with the caveat that this was his last chance.

“Someone snuck drugs into the rehab facility on Saturday for Redmond. He was given a drug test after he started acting suspiciously, and it came back positive for drugs,” a source close to the situation told RadarOnline.

Redmond must face Judge Keith Schwartz Thursday morning at 8:30 AM — and could very well be sent straight to state prison for a year as the judge originally threatened during sentencing.

Redmond O’Neal has struggled with drug abuse for years, even being arrested with father Ryan O’Neal for drug possession and having to get special permission from prison officials to attend mom Farrah Fawcett’s funeral. His most recent arrest is even more serious because he was in possession of a gun, which is a big no-no for convicted felons.

Ryan O’Neal has been too busy battling Nancy Grace to visit his son in rehab more than once — probably for the best, since Ryan’s other son Griffin O’Neal places the blame for Redmond’s drug problems squarely on the shoulders of dear ol’ dad. In fact, Griffin, Redmond and Ryan’s daughter Tatum O’Neal have all struggled with drugs, leaving only their half-sibling, sportscaster Patrick O’Neal, the only one who is consistently clean and sober.