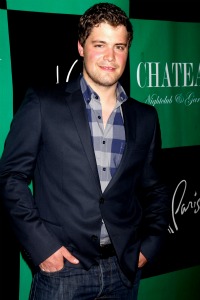 One big happy family? Not so much. With accusatory “memoirs” flying back and forth between all parties involved, there is no love lost between Levi Johnston, his ex-girlfriend Bristol Palin and her mother Sarah Palin — and Levi just ensured he will never be invited over for Thanksgiving dinner again.

In his book Deer in the Headlights: My Life in Sarah Palin’s Crosshairs, Johnston makes the shocking claim that Bristol Palin actually planned her pregnancy as a way to exact revenge on her mother.

Johnston says in the book that in March 2008 Bristol told him, “Let’s get pregnant” and that he had “been too dumb” to use protection.

He also says that contrary to Bristol’s claims in her own book that she lost her virginity to Levi when he got her drunk during a camping trip, they had actually already been sleeping together for quite a while.

When Bristol told her parents she was pregnant, Levi says, Sarah Palin thought it was a joke and laughed, while Bristol’s dad Todd Palin yelled at him, demanding he quit school and get a job. Levi even claims that Sarah and Todd hatched a plan to adopt the baby and pass it off as their own to “avoid a scandal”, but the young couple refused.

“I want to tell the truth about my close relationship with the Palins,” Johnston said in a statement released by his publisher. “My sense of Sarah and my perplexing fall from grace — how I feel and what I’ve learned.”

“I’m doing this for me, for my boy Tripp and for the country,” he said.

Deer in the Headlights: My Life in Sarah Palin’s Crosshairs by Levi Johnston will be released in bookstores September 20.