Michaele Salahi isn’t really missing after all. She’s just on a Journey… of sorts.

Talk about embarrassing. One-half of the White House party crasher couple, Tareq Salahi, put out an APB on his wife, Michaele Salahi, because he thought she was kidnapped. 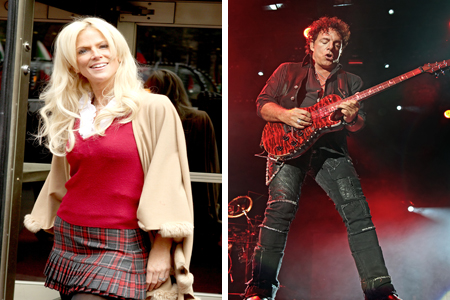 “We are reaching to the public pleaing [sic] desperately for your help. It is our belief as of last night, that Michaele Salahi may have been kidnapped or abducted and [is] being held under duress and forced to tell persons, including authorities she is okay,” Salahi said in a statement.

Except she’s not really missing.

The blond Michaele is actually with her boyfriend, Journey guitarist Neal Schon.

“But now we’ve learned … Michaele has been dating the rock icon, went to his show in Nashville last night and is currently with Schon in Memphis, where Journey is set to perform with Foreigner,” TMZ reported on the gossip site. “Scoop Marketing, the rep for Journey, confirmed with TMZ that ‘Nobody kidnapped her and they are in Memphis together.'”

“We’ve also confirmed Michaele has dated Schon in the past, and she’s called it an ‘intimate and passionate relationship.'”

Ouch. Fifty bucks says Tareq didn’t know about his wife’s dalliances with another man. Then again, maybe he did and just wanted to humiliate her in the press — but then we’d have to believe that the Salahis are capable of feeling embarrassment.

Let’s see: Cause national security breach at state dinner? Nope, not embarrassed then. Acted like idiots on The Real Housewives of D.C.? Yep, they still didn’t care. Accused of conning people out of money? Sure did, but they didn’t do it, honest.

We’ll wait with bated breath to find out how this turns out… or not.

Do you think this is a publicity stunt, or a marriage falling apart?