Khloe Kardashian pregnancy rumors refuse to rest. The reality star has made no secret of her desire to get pregnant, and now a friend is sharing what she and Lamar Odom are planning for baby names. 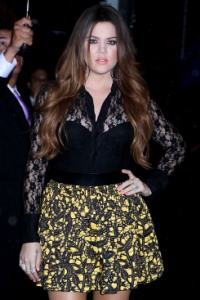 A friend of the couple reveals to OK! if Khloe Kardashian’s baby is a boy there will be no letter ‘K’ starting out his moniker. Lamar Odom, already father to 13-year-old Destiny, 9-year-old Lamar Jr. and 4-year-old Jayden from a previous relationship, has reportedly selected the name Luke Joseph.

However, a Kardashian ‘K’ themed pick is still a possibility. If the baby-to-be is full of sugar, spice and everything nice then mama Khloe gets the naming honors. Kayla perhaps? Kristina??

Sister Kim Kardashian is also dreaming of motherhood. A friend of the newlywed divulges, “She and Kris talk about it often. It’s something they both want and they’re both ready for. Kim stopped taking birth control a while ago, and they’re ‘actively trying,’ as she says, to have a baby.”

Then there’s sister Kourtney Kardashian who is already mom to 21-month-old son Mason, but also has babies on the brain! “I can’t imagine my life without my siblings — I just think it’s the greatest gift you can give a child,” Kourtney tells OK!. “I’d love to have another baby, and Scott has said over and over that it’s something he wants.”

Do you think the sisters should follow the Kardashian naming tradition?