Christina Applegate, Will Arnett, Maya Rudolph and the Saturday Night Live crew take on parenthood as only they can in NBC’s Up All Night. As stay-at-home hubby Chris (Arnett), working mom Reagan (Applegate) and her boss Ava (Rudolph) try to adjust to life with baby; all you cool, hip parents, aunts, BFFs and bosses out there are sure to relate. The new series arrives on NBC tonight, and SheKnows has your sneak peeks.

Up All Night premieres tonight on NBC, amid much well-deserved hype and high expectations. Christina Applegate, Will Arnett, Maya Rudolph, creator Emily Spivey (Parks and Recreation, SNL) and executive producer Lorne Michaels (SNL, 30 Rock) bring their own experiences and the quirky irreverence we love in 30 Rock and Parks & Recreatioin to the trials of today’s modern parents. 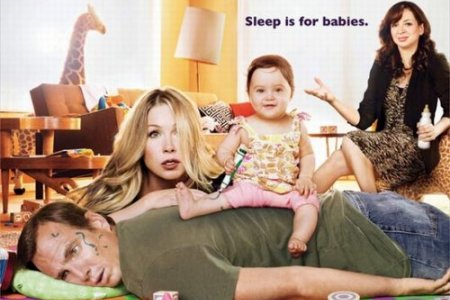 “These characters are later in life parents who have been doing it their way for a really long time, and now it’s someone else’s way,” Christina Applegate previewed. “I gave birth to my daughter at 39 years old, so I had many years of being completely self-obsessed and self-absorbed and doing what I wanted to do. Also, [people who] are 38, 40 now, still say ‘dude’ a lot. I know that we’re professional and we’re responsible, but I don’t know if we’ve grown up entirely. I still feel like I’m in my early 20s, so a baby comes and does change that.”

With a cast and creative team stocked with new parents who can relate to that fine mix of exhaustion and joy that comes with babies, new dad and America’s Got Talent host Nick Cannon has signed on in a recurring role as Calvin, a lively talk show emcee who is a bit too popular for show host Ava. Jennifer Hall (Nip/Tuck, CSI: Miami) also joins the office staff as Ava’s mousy assistant.

NBC Up All Night premieres tonight at 10, followed by the premiere of Free Agents. The sitcom will assume its regular 8:00 time slot next week, on Sept. 21.

Check out new parents Christina Applegate’s and Will Arnett’s sexy fantasies, below, and don’t miss their show preview.

Applegate and Arnett’s Up all Night Preview