JJ Abrams is returning to the Enterprise. The sci-fi favorite will reprise his role as director of the highly anticipated sequel, Star Trek 2. Set phasers to stun and get ready to engage!

JJ Abrams‘ talent, vision and inner fanboy helped bring 2009’s Star Trek to a new generation. Fans everywhere have been patiently waiting for his return to the series and it’s finally happened. After dodging questions but promising answers, Abrams has delivered. He’s officially signed on to direct Star Trek 2. 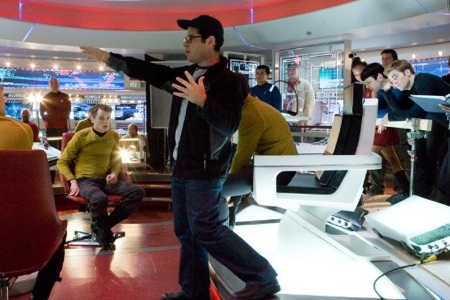 JJ Abrams’ return should reassure those who were worried about the sequel’s progress. It’s been almost three years since the previous film’s release and they’ve yet to finalize a story. According to EW, Alex Kurtzman and Roberto Orci are joining forces with producer Damon Lindelof to pen the script, which we know absolutely nothing about.

Who are the villains? How has the crew changed? Does Spock and Uhura still have “a thing” going on? These are just some of the questions that need to be answered.

Aside from Abrams and the writers, the primary cast of the first Star Trek is also returning including Chris Pine, Zachary Quinto and Zoe Saldana. The sequel was originally scheduled for release in June 2012 but Paramount pushed it back so the writers would have more time to work on the script.

Even though the wait is killing us, a wise man once said that anything worth having is worth waiting for.