Orlando Bloom is giving thanks for a three-story fall that nearly ended his life. How is it the actor can look back fondly on one of the worst times of his life? 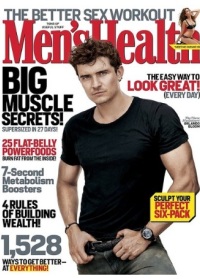 Orlando Bloom learned a thing or two about the man he’d like to become while recovering from breaking his back in a three-story fall thirteen years ago. “I’m grateful for it,” the now 34-year-old tells the Oct. issue of Men’s Health.

At the age of 21, Orlando Bloom, no stranger to adrenaline pumping risk taking, was climbing a rooftop terrace with friends when the drainpipe he was scaling collapsed. He fell three stories, breaking several vertebrae in his back and spent four days paralyzed.

The following 18 months of rehabilitation and multiple surgeries is a period Orlando Bloom calls “the making of me.” Men’s Health writes:

Being laid up, not knowing how the rest of your life will play out–or even worse, knowing exactly how it’ll play out if you don’t fight for a different outcome–is one very real, very difficult stretch of time. A movie would handle this period through a montage suggesting the passage of days. Bloom lived every second of it.

Over the years Orlando Bloom’s laundry list of broken bones and injuries has become shockingly long. He’s broken ribs (three), both legs (the right while skiing, the left in a motorcycle crash when he was 17), his nose (rugby), wrist (snowboarding), and skull (cracked, three times).

These days the actor continues to strengthen his back through pilates, weights and yoga. “I’m always working on my back,” he says. “It hasn’t prevented me from doing anything. But it’s a constant reminder.”

It’s taken a pair of people (wife Miranda Kerr and their young son Flynn) to slightly tame the avid mountain biker’s risk-taking nature. “When I’m riding a technical singletrack and there’s a drop… If I’m not fully focused, in my head I feel like I’m going to veer off, and I actually start to drift that way.”

“Fear is not a friend of mine. But it’s something to have a healthy awareness of,” Orlando Bloom concludes. “[But] I can’t stop living. It would ruin my creativity, the person I am.”