Morgan Freeman is Dr. McCarthy in Dolphin Tale, a man with a vision of creating a prosthetic tail for a dolphin named Winter who arrived at a Clearwater, Florida aquarium after losing his tail. Dolphin Tale is a true story and Freeman was thrilled to portray a man who would buck conventional wisdom by spending time and money creating something for a dolphin that most would never consider.

To Morgan Freeman, Dr. McCarthy did much more than save the life of Winter, McCarthy inspired amputees and advanced the science of prosthetics while simultaneously rallying a Florida community around a dolphin who, in turn, inspired him. 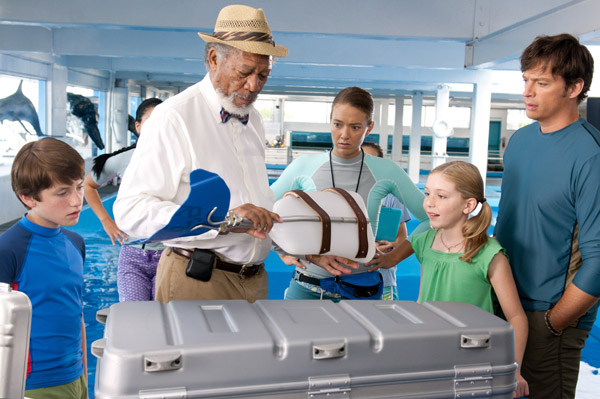 While on the Clearwater, Florida set of Dolphin Tale, Freeman dished to SheKnows about how his passion for ocean life knows no bounds from his decades of sailing as well as why his co-star Harry Connick, Jr. thinks he should record an album.

his passion for the ocean

SheKnows: You’ve had a boat for a long time. Have you had your own dolphin experiences?

Morgan Freeman: Heavens yes. I have a boat that I bought in Rhode Island and I sailed it down to the British Virgin Islands. We were between Bermuda and the Virgin Islands and this huge pod comes straight at us. They would play with me for over 20 minutes. I’ve had it happen before, but not a pod of dolphins that size. It was amazing to watch them leap in the air and come back and are like, “How’d you like that?” [Laughs] It was great. I’ve never been up close like that this on the Dolphin Tale set.

SheKnows: Do you feel that this is a film about conservation?

Morgan Freeman: I am passionate about what is going on with the oceans, mainly because we are for some idiotic reason, really screwing it up. I mean, we’re really killing the ocean. It’s like putting out the sun. Without it, there is no us. We’re not paying close attention. So, working with creatures like Winter, yes I have a very strong feeling for it. There is, I could say, a passion for it. Conservation, I’m going to preach that forever.

SheKnows: Because you can make a film like this, it’s an actor’s duty to present this side to it?

Morgan Freeman: No, I don’t feel that it is our duty. It’s mine because I feel it. You can’t overlay this on people. My job, personally, is to do as much as I can to spread the warning that if we’re not careful, it will end. The problem is, we don’t think beyond our immediate needs.

Morgan Freeman: The only thing that is going to force them is doomsday. We’re fishing the sea dry. We’re just fishing, fishing, fishing. There is a syndrome that is outlined by a writer named Daniel Quinn called The Tyranny of Agriculture. What that means to me now is one, the population of the planet is growing exponentially and in that, we are doing everything we can to feed all of these people — never mind that the planet itself has its own plans for population growth. Somehow we get the impression that we have domain and [we’re] domineering ourselves right out of existence. 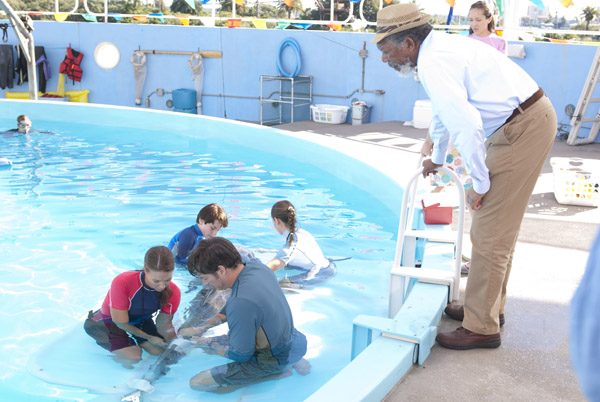 his pressure to sing

SheKnows: How are you and Harry Connick Jr. getting along? You seem like you’re enjoying your time with him.

Morgan Freeman: Oh my God, I can’t stand the man [laughs]. He’s got this holier than thou attitude. I like to sing and he just gives me these looks. No, that’s not so. He’s easy, we get along great.

SheKnows: Did you ever think about doing a CD?

Morgan Freeman: That’s all Harry is talking about is that I should do one! “Morgan, you should really do a CD.” Harry, I’m an actor. I mimic when it comes to singing. That’s it. He’s really preaching it.

SheKnows: What would you sing?

Morgan Freeman: I’m more of a balladeer. If I was a singer, that’s what I would be.

SheKnows: What’s it like working with these kids on Dolphin Tale?